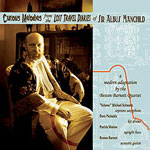 Curious Melodies is an interesting, even prophetic recording by guitarist Beston Barnett that combines intelligent musical composition with a fun fictional narrative, making a story that doubles as its own soundtrack. The overriding theme is the discovery of compositions by the fictitious widely traveled Sir Albus Manchild, a polymathic wanderer. A narrator introduces the musical document by introducing the enigmatic Manchild. The recording recounts the travels of the Knight of the Realm and the music that inspired his composition.

Even if you're not interested in the subtext of the story, the music is provocative and compelling. Beston chooses a Middle East motif that's heavily accented with Hebraic influence and instrumentation. Beston plays a Django Reinhardt-inspired gypsy guitar, fronting a bass-drums rhythm section. Michael Schwartz sports a soprano saxophone that gives the music its most potent regional flavor.

"Zautreg has the most densely ethnic sound, developing a theme that is mixed with other influences as the disc progresses. "Port-de-la-Bonne-Mort adds a Caribbean patois, while "Delola City is a Jimmie Rodgers country blues that Manchild picked up while traveling the cotton rows, transforming it, as Django stylistically did, into the complexity of "Gia Mang.

Each composition retains elements of the previous ones, providing a polyglot palette. This relatively small quartet has the ability to sound very large and full. It remains to be seen if the recorded marriage between music and narrative will be a marketable commodity. The music in these Curious Melodies is superbly composed and played, warranting a spin beneath the laser.