By HRAYR ATTARIAN
January 12, 2015
Sign in to view read count 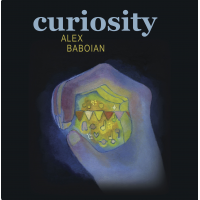 Guitarist Alex Baboian's debut Curiosity is an intimate, contemplative and supremely lyrical work that draws from his various influences to create a cohesive whole. Admixed with seven Baboian originals are a classic Beatles song, a 1950s pop standard and a modern electronic tune; here stripped down to its melodic core. All ten are delivered with the same understated elegance and slow simmering passion.

A similar pattern of progression within each track is evident elsewhere. For instance, the intriguing "Rockwell" opens with Baboian's unaccompanied eloquent flourishes that usher in the trio's up-tempo refrains reminiscent of small swing ensembles. Baboian's stimulating extemporization, arising, from this rather conventional substrate, flirts thrillingly with dissonance. Wandell and Coleman buoy the leader's monologue with their free flowing and angular rumble. Coleman concludes with a graceful and reflective solo.

This transition from one style to another is facile and seamless and maintains a thematic unity both within each composition and the album as a whole. "Mouse" for example starts with the Baboian, Wandell and Coleman coalescing their individual, sparse expressiveness into an introspective, soulful conversation. As the spontaneous group play develops it takes on a provocative edge within a Baroquish structure, simultaneously suave and raw.

With his first date as a leader Baboian proves himself a superb composer, an original improviser and an apt bandleader. Even this early in his career he demonstrates a unique and masterful musicianship that, hopefully, represents the beginnings of a superlative body of work.