By KARL ACKERMANN
January 6, 2018
Sign in to view read count
The Savoy Café was purported to be the most racially integrated club in Boston, a distinction that made it popular with a broader audience but less popular with city officials and police who struggled with racial issues. The club opened in 1935 on Columbus Avenue—a space too small for a dance floor. Roy Haynes started playing at the Savoy as a teenager and "Red" Allen, trombonist J.C. Higginbotham and clarinetist Edmond Hall played the venue. Newport Jazz Festival founder George Wein was a pianist at the club, and on at least one occasion each, "Hot Lips" Page and Sidney Bechet stopped in to perform. As happened with Roseland, the downturn in big band popularity left a gap in club programming. The Savoy Café reverted to Dixieland in the mid-1950s and closed shortly afterward, in 1956.

The Hi-Hat opened in 1937 but didn't feature jazz performances until 1948 at its Mass Avenue and Columbus location. The opening trio had been pulled from a local orchestra and included saxophonist Charlie Mariano and drummer Joe MacDonald. Woody Herman later came to play and Sabby Lewis took advantage of being in close vicinity to Roseland. Around the same time period the club introduced regularly scheduled bebop shows. Popular with the locals, these shows were racially segregated and included Jaki Byard and Nat Pierce. Bostonian, Sonny Stitt played The Hi-Hat as part of an all-local quartet. The club brought in its share of distinguished talent in the 50s including Miles Davis and Thelonius Monk but was burned down in 1959.

George Wein opened Storyville in 1950 in the Hotel Buckminster and featured regular performances from the likes of Billie Holiday, Ella Fitzgerald, Duke Ellington, Louis Armstrong, Charlie Parker, Gerry Mulligan and Dave Brubeck. In 1953 the club moved to the Copley Square Hotel where it remained until 1959 when it relocated to the Bradford Hotel on Tremont Street. While the club was a platform for the best talent in jazz, Wein's high standards came with a reciprocal cost. The financial strain led to Wein giving up the club in 1960. Wally's Café opened in 1947 at 428 Massachusetts Avenue and moved across the street in 1978 when most of the Mass Avenue clubs were long gone. Joseph Walcott—known as Wally—was the first African American to own a nightclub in the Boston area. Walcott used his venue to successfully mix students from Berklee College of Music, the Boston Conservatory, and the New England Conservatory of Music with veterans of the swing era. Walcott died in 1998, at the age of 101, but his family continues to run the club in the same vein, primarily giving the stage to students. Wally's Café is the oldest surviving jazz venue in Boston and one of the oldest in the U.S.

Today, in the Boston area, there are two, more modern, jazz clubs along the Charles River. The Regattabar opened in 1985 at the Charles Hotel at 1 Bennett Street in Harvard Square and has featured artists such as the Mingus Big Band, Ahmad Jamal and Ron Carter. Scullers opened in 1989 in the Allston neighborhood, just south of Harvard. Along with jazz, the club features world music, cabaret and blues but shows are sporadic. Saxophonist David Sanborn and Cuban trumpeter Arturo Sandoval have played there recently but local talent dominates the calendar. Thelonious Monkfish is at 524 Massachusetts Avenue in Cambridge and mixes sushi with a full calendar of jazz from accomplished, if not well-known, artists. Many, such as Yoko Miwa, Paul Broadnax and Andy Voelker, play extended engagements.

There were jazz satellites in other U.S. cities, though often modest in scope and longevity. Like Philadelphia, Detroit had a stellar home-grown crop of jazz musicians that went on to national prominence. Elvin, Hank and Thad Jones, Howard McGhee, Tommy Flanagan, Paul Chambers, Yusef Lateef, Milt Jackson, Kenny Burrell, Ron Carter, Frank Foster, Sir Roland Hanna, Donald Byrd, Sonny Stitt, Alice Coltrane, James Carter, Geri Allen, Kenny Garrett and Betty Carter are just a few of the well-known artists to emerge from that city. And like many of the jazz hubs of the 1920s, Detroit was on the cusp of modern jazz from the outset.

At the turn of the twentieth century, the burgeoning auto industry brought large numbers of southerners to Detroit. The forerunners of the big bands were at the vanguard of the city's music industry; one that later gave birth to the Motown sound. Beginning in the era in which Storyville was vanishing from New Orleans, the so-called society bands of Detroit played local events, weddings, parties and dances staying within the boundaries of standard ragtime material. Two black band leaders emerged from that time as having broken new ground. Benjamin Shook experimented with, and perfected, syncopation while Leroy Smith, was playing symphonic jazz of the Paul Whiteman style, in the early stages of the genre. Smith played the Pier Ballroom, a famous dancehall that was part of an amusement complex called Electric Park. Competing for audiences was an all-white society band led by Paul Specht that played the Addison hotel in downtown Detroit.

Big Band Jazz took over Detroit in the mid-1920s with the Jean Goldkette Victor Recording Orchestra and the McKinney's Cotton Pickers being credited with playing a pivotal role in the development of that style. Arranger and saxophonist Don Redman—the uncle of Dewey Redman, and great-uncle of Joshua Redman—came to Detroit in 1927 to lead the already established Cotton Pickers. Under his leadership the band became a significant proponent of big band jazz, first regionally and later, nationally. It was rival band leader, Goldkette, who booked the group into the Graystone Ballroom—a venue that had previously barred black musicians. It was on Goldkette's insistence that the group, once called "William McKinney's Synco Septet," changed their name to the racially offensive ..."Cotton Pickers." The Graystone Ballroom later hosted Duke Ellington on specially reserved blacks-only nights.

Venues like the Chocolate Bar, Plantation Club also hosted cabaret bands, the latter was most known for saxophonist Cecil Lee's seven-piece band. The Melody Club and The Cozy Corner provided work for former large ensemble players. A popular jazz venue, Club Harlem was short-lived and later became The Flame. The business district and entertainment core of African-American residences was known as Paradise Valley and the adjacent south-bordering neighborhood of Black Bottom drew iconic figures such as Billie Holiday, Ella Fitzgerald, and Duke Ellington from the 1920s through the 1950s. The underlying racial tension in the area was capped by a devastating 1943 race riot that resulted in thirty-four deaths and the destruction of much of Paradise Valley.

Baker's Keyboard Lounge has featured jazz since 1939 and is the oldest jazz venue in Michigan. Ella Fitzgerald, Miles Davis, Oscar Peterson, George Shearing, Sarah Vaughn, Joe Williams, Maynard Ferguson, Cab Calloway, Woody Herman, Modern Jazz Quartet, and many others have played the Livernois Avenue location. Cliff Bell's opened in 1935, closing for twenty years in 1985 and reopening in 2005. The club features local and college talent. Similarly, Jazz Café primarily hosts local artists, albeit, in a more opulent setting on Madison Street. Dirty Dog Jazz Café in the affluent waterfront area of Grosse Pointe is a recent entry having been established in 2008. The club typically features sidemen with impressive resumes. Further into the suburbs are Goodnight Gracie in Royal Oak, Black Lotus Brewing Co in Clawson and Live Night Club to the west in Ann Arbor. Each focus on regional artists, occasionally the same acts moving back and forth between venues.

Washington, DC had the Howard Theater at 7th and T Street and The Lincoln Theater at 13th and U Streets. In 1927 the Lincoln became the Lincoln Colonnade and listed well-known artists such as Louis Armstrong and Count Basie, who were also performing at the Howard. San Francisco also offered notable jazz clubs in the 1950s and 1960s including the Jazz Workshop and The Blackhawk where Thelonius Monk recorded Thelonious Monk at the Blackhawk (Riverside, 1960) and The Miles Davis Quintet recorded In Person Friday and Saturday Nights at the Blackhawk, Complete (Columbia, 1961). The celebrated Keystone Korner was a significant venue in the North Beach neighborhood of San Francisco. It opened in 1972 and featured Jessica Williams as the house pianist for a number of years. Sonny Rollins, Art Blakey, Miles Davis, McCoy Tyner, Bill Evans, Betty Carter and Stan Getz added to the club's legendary status before they closed in 1983. Dimitriou's Jazz Alley has been a Seattle mainstay for three decades. Its upcoming calendar includes shows from Abdullah Ibrahim, Terence Blanchard, Chick Corea and Bill Frisell.

There are well over one-hundred and fifty cities or towns in the U.S. that have some type of venue for jazz, and far more suburban locations that fly under the radar. In some cases performances are sporadic, or function as a restaurant hors-d'oeuvre, or a lounge act of questionable identity, but for a genre that Miles Davis pronounced dead more than half a century ago, there seems to be a steady demand for live jazz. In the conclusion of this series, we look at jazz clubs outside the U.S. and talk to Peter Maguire, an Australian journalist turned web developer. Maguire has spent years compiling jazz related databases that offer a global view of clubs, festivals, promoters and more. 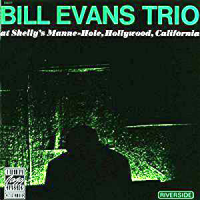 One of Bill Evans last projects for the Riverside label, before departing for Verve, At Shelly's Manne-Hole featured the often under-recognized rhythm section of Chuck Israels on bass and Larry Bunker on drums. Culled from two nights of performances, the album's release was delayed by management snafus at Riverside. Upon its release, the label was less than overjoyed with the recording quality yet there is good reason to recommend this one. The relatively insignificant cadre of Evans' detractors often cite his predictable lyricism and introspection as fatiguing features of his music. For that group, At Shelly's Manne-Hole may be a revelation as we hear a more direct approach from Evans. The opening number, "Isn't It Romantic," and "Swedish Pastry" both demonstrate a willingness to show a bit more aggression. Evans solo on "Blues in F" is alone worth the price.