Culture Club at the NYCB Theatre at Westbury 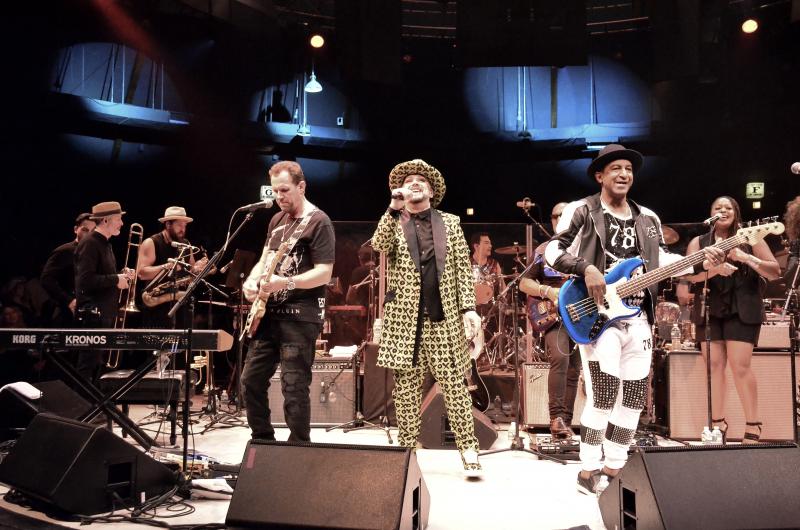 Culture Club was formed in 1981 when lead vocalist Boy George, who had been a member of Bow Wow Wow (where he was billed as Lieutenant Lush), enlisted guitarist and keyboard player Roy Hay, bassist Mikey Craig and drummer Jon Moss. With the band members in place, the musicians realized they had gay Irish lead singer, a black British bassist, a Caucasian guitarist, and a Jewish drummer, they decided to christen themselves as Culture Club.

During its career, the band scored a number of worldwide hits with "Church of the Poison Mind," "Do You Really Want to Hurt Me?," "I Just Wanna Be Loved," "I'll Tumble 4 Ya," "It's a Miracle," "Karma Chameleon," "Miss Me Blind," "Move Away," "The War Song," and "Time (Clock of the Heart)." During its career, Culture Club has sold more than 150 million records and ten of its singles reached the U.S. Top 40.

On a warm August evening in Westbury, Long Island, Culture Club turned back the clock for its legions of fans who packed the cozy NYCB Theatre. After the opening band was a no-show, the audience endured an extraordinarily long wait. By 9pm, when the band appeared, the crowd was feverishly anticipating Culture Club's performance. They were not disappointed.

When the lights finally dimmed, the band was lead down to the rotating stage situated in the center of the venue. Moss immediately got things started. Sitting behind the skins in a plexi-glass enclosure, the drummer launched into the powerful backbeat of "Church of the Poison Mind." The audience responded with thunderous applause as Hay, Craig, the horn players, female backing vocalists, an additional guitarist, percussionist and keyboardist played the rocking tune. Finally, at the last possible moment before the opening vocal line, Boy George appeared. Dressed in a custom-made lime green suit featuring a repeating black pattern with matching top hat, Boy George commanded the stage from the moment he stepped onto it.

When he addressed the crowd, Boy George smiled and said, "This is our second in the round gig. We did one in Phoenix and it was very scary...We're gonna have fun! One thing that is for sure, is that this place is filled with crazy people—on stage and out there." He then paused and introduced the next song saying, "This one is called 'It's A Miracle.'"

The singer was in a very playful and talkative mood. He was also clearly intrigued by the revolving stage. After making reference to the part of the stage that didn't spin, Boy George announced that he planned on not straying too far from that portion of the platform. He also stated that the band was "gonna play some of our battle hymns and some new songs too. A new song is just a friend you haven't made yet. Remember that."

The set moved forward with ""I'll Tumble 4 Ya," a muscular Motown-influenced version of "Move Away" (featuring fantastic brass and horns), the new song "Human Zoo" (which is slated for release on the band's upcoming Tribes CD) and a reggae infused cover of Bread's "Everything I Own."

While introducing "Black Money, "Boy George again took an opportunity to address the crowd. He said, "There are a few basic tenets of a Culture Club show—dance like no one is watching, love with all your heart and dress like you don't give a shit. We're gonna go back to Color By Numbers (Virgin, 1983). The audience went wild and stayed worked-up through "Time (Clock of the Heart)," the new song "Like I Used To" (which fit into the set as if it were an old friend), "Miss Me Blind" and "Do You Really Want to Hurt Me?" (which featured and introductory snippet of Michael Jackson's "Billie Jean"). At the end of the song the band briefly left the stage.

When they musicians returned, Boy George had changed to a similarly themed outfit, this one was a light grey suit with a black X and O design and a matching top hat. The encore was a rocking, sing-along version of "Karma Chameleon" that had the entire audience on its feet clapping and singing and dancing along with the band. As the lights came up and the band left the stage, the crowd gave a resounding ovation. Craig waved to the crowd and announced, "We'll be back." The audience cheered even louder in response.

The evening's performance was almost flawless. As the large band played slightly updated versions of the classics, the changes made the songs seem fresh and current. Other highlights were the inclusion of "The Crying Game" (which was one of Boy George's solo hits) and the cover of T. Rex's "Bang a Gong (Get It On)."

Before the show, many in the audience were heard wondering if Boy George would be able to hit the high notes of his youth—especially after having cancelled performances in 2015 due to surgery on his vocal chords. Half way through the opening number it was apparent that those fears were unfounded. Boy George was in fine voice. Though his voice had changed and matured slightly over the years, on this night it sounded richer than it had in his younger days.