By SAMUEL STROUP
September 4, 2018
Sign in to view read count 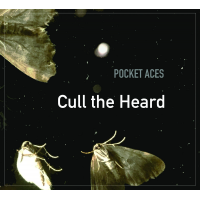 Pocket Aces have made all the right moves in gearing up for their first album. The three improvisers are comfortable with each other, having spent time playing together, unearthing their sound. Cull the Heard finds the leaderless trio composing as they improvise, curating an album full of focussed and engaging songs. The Boston trio omits any overindulgence—even in their album's 'out'-est moments—favoring subtlety over clutter. Though experienced in playing cover tunes as well as their own, Pocket Aces have proven free improvisation to be the vehicle for their music's fulfillment. Perhaps their background in playing composed music (they've spent time playing the music of Charlie Parker, Ornette Coleman, Eric Dolphy and Paul Motian) informs the bands improvising. Though all their music is free, time and structure inspire their pieces, concise and eloquent.

Cull the Heard allows its musicians to showcase technique and touch, which Pocket Aces have plenty to showcase. Guitarist Eric Hofbauer and bassist Aaron Darrell often drop to a whisper on "Eponymous," as drummer Curt Newton leads the way. The noises of Newton's metal brushes sweeping along his snare fill the song for a moment, before Hofbauer and Darrell join him, softly plink-plonking a melody that sounds like footsteps in the dark hallway that Newton's brushes illuminate.

"Chinook," (named for the seasonal winds that blow through the Great Plains) explores more of the band's technique as the guitar becomes percussion and the drums sing the melody. Hofbauer pulls sounds from his hollow-body that he compares to wind chimes. They ring in the breeze created by Darrell's tumbling ostinato. The trio plays the piece as though they really are a warm wind tumbling down the Rockies. "Gust" is the only word to describe Newton's implied quick tempo. His hi-hat blasts and heavy ride cymbal flourishes bring to mind the playing of Ed Blackwell.

The fifth track, "Crash Course," is a riotous rock track that begs for headbanging despite its arhythmic turbulence. It's a short, oddball song that comfortably finds a home halfway through the album. Pocket Aces' take on free jazz is a refreshing one and the band represents a most welcome voice. They serve as a great reminder that there are many methods of songwriting and endless possibilities in creative music.