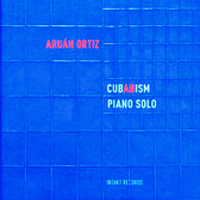 The profile of Cuban-born pianist Aruan Ortiz climbed a few rungs on the ladder with the release of 2016's Hidden Voices (Intakt Records). The sound there was dark and brooding, as Ortiz constructed geometric musical shapes filled with sharp angles and unexpected tangents. His covers on the recordings—one tune by Thelonious Monk and another by Ornette Coleman—served as clues as to his own iconoclastic approach.

Hidden Voices featured the pianist in the trio format with bassist Eric Revis and drummer Gerald Cleaver. Cubanism finds him going solo, exploring every musical avenue he has traveled: classical, jazz, Afro- Cuban and Afro-Haitian constructs, and—shifting into the overlap of audio and visual art—cubism, especially the work of Cuban painter Wifredo Lam, whose masterpiece "The Jungle" inspired the longest (ten minutes plus), most complex and eeriest of the compositions here, "Cuban Cubism."

These are stark, bleak sounds in large part. Foreboding. Sometimes spare, sometimes dense and busy. There is a sense of this music forming a suite, a sense of an assemblage of puzzle pieces fitting together, but not in the expected way. At times robustly percussive, and other times gentle and soothing, deep and erudite, appealing to, by turns, the gut and the brain and the heart.

Cub(an)ism showcases the unique voice of Aruan Ortiz, who proves himself idiosyncratically successful in shaping his unique vision and presenting it to the world.