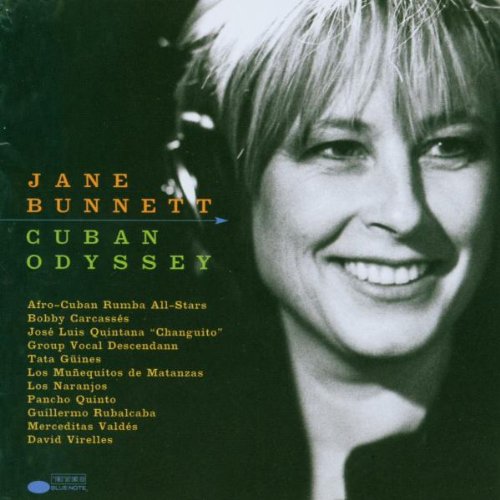 Jane Bunnett visited Cuba for the first time in 1982, but in many ways – musically, at least – she has never really left.

This Odyssey presents music from Havana and three other locales recorded during her trip to Cuba with trumpeter, producer and husband Larry Cramer, featuring Bunnett on flute and soprano sax (she is also a classically trained pianist and clarinetist). Its mix of folklore, dance and party music, traditional and modern Afro-Cuban, and modern jazz styles, advances themes Bunnett has consistently explored with her Spirits of Havana ensemble. “This recording combines all we are about,” she allows. “It’s choral, solemn, rowdy, a folky son thing, hard-blowing jazz, traditional danzon and bolero tunes, lots of different vibes.”

Cuban Odyssey glows with warm feeling, as if no matter where the music travels Bunnett is never too far from feeling at home. The journey begins in Havana with the party anthem “Quítate el Chaquetón (Take Off Your Jacket),” riotous revelry with a Cuban all-star band, including Gonzalo’s father Guillermo Rubalcaba, also a pianist. Later, Bunnett gloriously sways and wobbles with this same group through another classic party descarga, “Rum Con Rum (Rum with Rum).”

Bunnett also recorded (for the first time) with ensembles from Cuban locales outside of Havana. In the port city of Mantazas, Los Munequitos de Matanzas dance with Bunnett through “Suite Matanzas”; in Cienfuegos, her soprano squeals and laughs as it twirls with legendary son band Los Naranjos to face “El Diablo (The Devil).”

Bunnett recorded three haunting pieces in a cathedral in Camagüey with the ten-voice choir Descedann, composed of descendants of Haitian slaves and émigrés living in Cuba singing ancestral songs in their native patois. “Nan Fon Bwaa” solemnly aches and moans like the deepest, bluest African-American gospel and “Alabans” certainly sounds like it would fit in a liturgical service.

When she affords herself room, Bunnett proves an adventurous and energetic soloist, as in the opening “Arrival,” her forward-looking soprano sax accompanied only by percussion and bata drums, and in “Pensando en Jane,” where her saxophone shreds through the chart like passionate Coltrane singing in his soprano voice. But this is an extremely ego-less recording, where Bunnett’s love of the music proves stronger than her love of self.