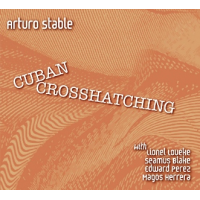 Seemingly under no duress to prove himself, exceptional percussionist Arturo Stable exudes confidence in any number of situations, whether playing with the great Paquito D'Rivera, adding rhythmic Cuban flavors to the Philadelphia Symphony Orchestra or leading his own band in its memorable 2007 debut, Notes On Canvas (Origen Records). A conceptualist who incorporates ethnic music with other influences, his sound represents more than typical Latin percussion. Stable's thoughtful perspective illuminates Cuban Crossinghatching, which he states "is the result of a few months of research trying to glue my musical past with my present."

The presence of Mexican-born singer Magos Herrera on the compelling "Pienso en tí" only adds to the enjoyment; her lovely voice complimented by the group's elegant support. The unfaltering focal point of bassist Edward Perez is the anchor, highlighted on "Let It Be Spring" and the abstract-leaning "Tinto." Stable's writing is empathetic and democratic; exposing each musician's artistry while subtly and expertly revealing skills marked by touch and emotion including some extraordinary piano chops on "Duet with Guitar 2," as the percussionist and Loueke exchange in a gentle dialogue. Its pleasant surprise is consistent with the project's vibe—illuminating Stable's thoughtfulness as a musician and composer.