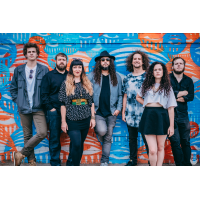 Analog Son is the brainchild of Jordan Linit (guitar) and Josh Fairman (bass), with only goal, TO FUNK!

Jordan Linit and Josh Fairman originally created Analog Son around a studio project involving the Shady Horns, Ryan Zoidis and Eric Bloom (Lettuce/Soulive), and Joe Tatton (New Mastersounds). Now in 2018, they have cultivated a steadfast crew of top-call musicians to round out their roster, forming into a more cohesive unit as opposed to the Steely Dan format the group has used with a rotating studio cast on the prior three albums.

Analog Son has come up with many wild creations and a futuristic Funk sound. Hailing from Denver, CO, the Analog Son duo has had great success recruiting top-notch musicians for their collaborations. As rising stars on the international funk scene, it's no secret; the two just know how to produce some excellent music!

Their 2018 single, "CTI" from their forthcoming studio release "Funky Mother," is probably their jazziest jazz-funk song so far. Eric Luba's organ jam excels, and Jordan Linit's wah-wah guitar grooves on top to give the tune an authentic 1970s feel (without ever being cheesy or obnoxiously retro). The rhythm section keeps it tight, as the horns make a joyful noise.

As the name Analog Son implies, the band truly embodies the heavy-hitting, authentic groove music that was cultivated in the 70s. "We utilized some really 70s recording techniques, like putting t-shirts on the drums and recording with just a couple mics. We ran a harmonica mic on the drums through a 1960s Princeton reverb and just really focused on the production techniques to make it sound like some real 70s funk," Fairman says.

Analog Son has etched their name in as one of the top bands on today's funk scene, and on "CTI" they show their jazz-funk chops too. It's no secret that funk is good for the soul and Analog Son's 2018 album, "Funky Mother," promises to make you shake what your mama gave you, when it is released on September 28.