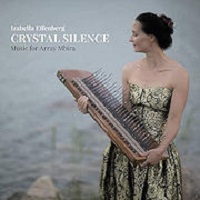 Many musicians play a second instrument, though rarely do they venture to record an entire album with it. Such a commitment would likely require complete technical command of the secondary instrument, or failing that, courage in spades. Izabella Effenberg has both. For her third release on Unit Records, following her sextet debut Cuentame and the trio outing IZA (2017), the Polish-born, Germany-based musician not only switches from her habitual vibraphone to array mbira—a modern variant of the African mbira—but she also launches solo into an entirely new sonic world.

It's quite a side-step from Effenberg, whose first two albums revealed her dual background in classical percussion and jazz. Whilst there is a chamber aesthetic to much of the music on Crystal Silence, and improvisational flow to boot, the idiom in which Effenberg immerses herself here is something distinct, with only ghostly allusions to her jazz and classical roots. In fact, the unusual character of the array mbira's sound, an alluring cross between harp and bell, naturally imparts a sense of otherness to Effenberg's very personal compositions—something akin to New Age gamelan.

These fourteen pieces were inspired by Effenberg's new-born son Jan, whose positive critical response to his mother's practice and real-time composing presumably spurred Effenberg on. It's not entirely surprising, perhaps, that several of these tunes, particularly "Esperanza," "He," "Awakening" and "Solitaire," have a tender, lullaby-esque airiness and a bewitching, dreamy quality. Yet in parallel with the music-box delicacy Effenberg plies a subtle current of flowing lyricism, all within a robust compositional frame-work. It's no great step to imagine some of these tunes spun by the likes of Fred Hersch, the Modern Jazz Quartet or, on the gently bluesy "Spanish Ballad," Chet Baker.

Two tracks feature Marcin Gorny on marimbola and percussion. The rhythmically grooving "Dave Bubek" [no typo -Bubek is son Jan's nickname].with Gorny laying deft yet insistent pulses, seems to free Effenberg, who works the array mbiras's metallic tines with feverish intensity. Gorny also adds deft rhythmic pulses on the more abstract and atmospheric "Jugando." The percussionist's presence on these two compositions breaks up the tonal uniformity of the album as a whole, hinting at the possibilities of Effenberg's compositions in the hands of an empathetic accompanist. Effenberg's own minimalist percussive touches, notably a bowed vibraphone on the two-part title track that bookends the album are also effective in further expanding the sonic range.

The unchanging textural soundscape of the array mbira, however, is offset by Effenberg's rich emotional palette and her compelling virtuosity. Contemplative, melancholy and occasionally sunny in tone, the common denominator of these fourteen tracks is their meditative quality. Whether the music's allure lies in the strength of Effenberg's compositions, in her virtuosity, or simply in the ethereal sound of the array mbira, is hard to pinpoint. But alluring it most definitely is