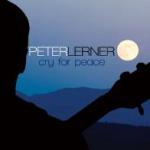 Lerner proves himself a highly communicative soloist who applies his ample guitar chops with diligence. From beginning to end, Cry For Peace is an enjoyable, well programmed listen.