By PHILIP SONGA
December 1, 2001
Sign in to view read count 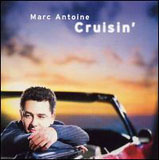 Consider his name and you'll most likely guess that he is French. Listen to his music and you'd be forgiven for mistaking him to be Latin American. This mystery man is French jazz guitar man Marc Antoine (not to be confused with Puerto Rican crooner Marc Anthony). I was introduced to the sound of Marc Antoine via his collaboration with Dave Koz on the song "You Are Me, I Am You" from Koz's album The Dance (1999).

A year later Antoine released Universal Language, whose most memorable track is the also Latin-tinged "Palm Strings" (wordplay on the town of Palm Springs, California). But beyond that I did not know much about him. Well, since then Antoine has released another album simply titled Cruisin'. Quite often it is hard for one to go out and spend hard-earned shillings on an artist one isn't sure about. I am glad to say that with Cruisin' I was not disappointed. The collection is a gem for the guitar lover, and more especially those that love Latin rhythms. Because while Antoine is unabashedly French—a crazy Frenchman, he calls himself—he has mastered Latin jazz rhythms to the hilt and wrote the majority of the tracks on the 10-track album.

Cruisin' takes you through a kaleidoscope of feelings and heights right from the start. The opening salvo is Antoine's take on the song "Mas Que Nada" on which he gets some heavyweight assistance on vocals in the form of Patti Austin. He follows that with the breezy "On The Strip", before switching into cruise mode with the delightfully funky title track "Cruisin'." He delivers more Latino vibe on "Sierra Bella", "Java Montmarte" and slows the tempo somewhat with the laid-back "Indian Summer". But Antoine is not through yet, delivering a stellar flamenco performance on "Fuego", before easing out with the mid-tempo ballad "Primo," featuring the vocal talents of David "Khalid" Woods. This particular track is reminiscent of Carlos Santana's comeback hit "Smooth."

Other songs on the album are "Just Chillin" and "Caribbean Morning." Antoine and his crew really deliver the goods on Cruisin'. On second listening it was all I could do to keep still and refrain from shouting for joy, for Antoine does create some awesome musical magic with his g-strings. (Guitar strings, that is!).