By JOHN EPHLAND
December 20, 2015
Sign in to view read count 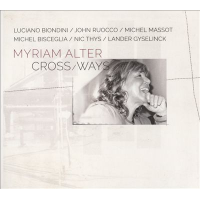 There's a soulful melancholy to much of this music. Composer/pianist Myriam Alter has created yet another collection of her songs that have the potential to evoke feelings of yearning, sadness and perhaps a deep buried joy with Crossways. Akin to a previous outing on enja, the elegiac Where Is There, Crossways can be heard as a kind of movie soundtrack, where the listener is swept up in another world full of imaginings and wonder across 11 tunes. One of the links between the two albums is clarinetist John Ruocco, whose pliant stick provides a certain presence that burrows deep into Alter's composerly mindset. (Ruocco can also be heard on Alter's If, also on Enja.)

For those new to the longtime Brussels resident's work, Alter comes from a Judeo-Spanish family, her mother from Saloniki, Greece, her father from Istanbul. It is possible to listen to her music without that backstory, but it sure helps to know it. Add Italians Luciano Biondini on accordion and arranger Michel Bisceglia Trio on piano, Belgians Nicolas Thys on bass and tuba/trombone player Michel Massot , Dutch percussionist Lander Gyselinck and the American Ruocco (now based in the Netherlands), and it's no wonder perhaps where the album gets its title.

Beginning with the quiet, solemn "Again," we hear the first of two primary voices who is soon joined by that second voice. Biondini introduces the first half the the haunting melody while Ruocco finishes, the two then sharing in a counterpoint, Biondini's accordion providing subdued yet bright colors to Ruocco's more earthy clarinet. Indeed, it is Biondini and Ruocco who provide the main voices to Crossways, their exchanges a marvelous example of instrumental empathy. Throughout the album, Bisceglia's arrangements allow for a fair degree of improvising with the obvious structures of each song, giving the listener the reassurance that they know just where they are. That haunting Spanish modal tinge, reminiscent of Miles Davis and Gil Evans' take on Rodrigo's "Concierto de Aranjuez," is ushered in by Biondini's gradual sustains with "No Man's Land." The alternating sections provide different moods, from somber to lively to that recurring sense of longing. As with the first tune, the percussion and drums, along with the vibrant voices of Thys' bass and, in this instance, Massot's resonant horn and Bisceglia's searching solo piano work all help to surround Biondini and Ruocco's tuneful deliveries, where "No Man's Land" almost imperceptively leads into "Inviting You" to form a kind of medley.

"Weird Mood" is the album's peppiest number (in 7), it's upbeat, busy lines forming a kind of dervish, Massot's jazzy trombone the featured artist. That dancing vibe continues with "Dancing With Tango," Ruocco this time taking the lead voice, with Bisceglia's evocative piano in support, Biondini joining Ruocco in unison lines opposite Bisceglia as this bluesy stroll of a number plays out. And "Back To Dance" returns the mood to something resembling "Weird Mood"'s spirit but with a somewhat calmer, casual cha-cha feel. This Latin tune provides Crossways' most charming melody, and with ample room more amazing interplay between the various players. Crossways' more folk-like musical qualities (as opposed to jazz) is best heard with "Don't Worry," its dirge-like effects somehow capable of evoking a campfire setting even as the waltz swing feel allows for more improvisation.

With Crossways, it's as if Alter is evoking a wistful past that blends with the present, a bit of Paris' romantic yearnings with the grit and charms of the countryside. Indeed, there is no one else writing music like this today, a music that combines a unique collection of instrumentalists and their instruments with the various feelings of peacefulness, tranquility, nostalgia even. To close out the album, composer Alter herself takes to the keys, as she invokes the spirit of a former mentor, pianist Mal Waldron, her spontaneous improvisation somehow reflecting some of Waldron's own style even as she does a nifty job of dovetailing her solo (which is unlike anything else heard here) into the spirit and mood of Crossways.

Again; No Man's Land; Inviting You; Weird Mood; Dancing With Tango; Back To Dance; Don't Worry; How Life Can Be; Above All; Crossways; No Room To Laugh.