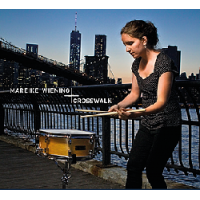 Drummer and composer Mareike Wiening is originally from Germany where she got her Bachelor of Music (University of Performing Arts, Mannheim) in 2011. She then had the opportunity to move to New York City after receiving the DAAD scholarship from Germany, enrolling at New York University where received her Master of Music degree in 2014.

Crosswalk is her debut recording, the quality of which can be at least partly discerned by the members of her group: veteran Rich Perry on tenor sax, vibraphonist Patricia Brennan, who plays with Vijay Iyer, Montreux Jazz Competition winning guitarist Alex Goodman, along with Marty Kenny on bass and Angelo di Loreto on piano.

The fact that there are three harmony instruments is a bit surprising, but each player listens to the others carefully in order to be additive, thus giving Wiening's music an enveloping, lush sound, which is very attractive.

As might be expected from a composer who is a drummer, the rhythmic underpinnings of the music can get complex, and yet Wiening is less a leader and more co-member who adds her sounds to the mix. The rest of band responds to Wiening's drumming by being very free with their own phrasing and rhythm.

For the most part, each tune is in ABA form, allowing the improvisations to be heard as originating from and returning to the melody. The melodies, which are not straightforward in phrase or harmonic structure, lend themselves to wide open playing, and it is easy to let the music just flow and wash over you.

The band as a unit is superb, with each soloist's voice clearly speaking, obviously inspired by the compositions, the arrangements and how the other players sound behind them.

Thoroughly modern, progressive mainstream jazz, Crosswalk has many layers that unfold with each repeated hearing; Wiening will most definitely become a leading part of the jazz scene in the years to come.