By HRAYR ATTARIAN
August 10, 2009
Sign in to view read count 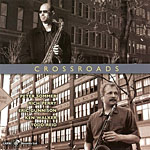 It takes self-confidence and talent for a new musician to lock horns with a more experienced practitioner of the same instrument, and tenor saxophonist Peter Sommer has plenty of both. His only other recording was a collaborative effort with pianist Art Lande, and this second recording is his first as a leader.

On this record, Sommer's seasoned partner is Rich Perry, a veteran of the legendary Thad Jones/Mel Lewis Orchestra and a member of the Maria Schneider and Vanguard Orchestras. The music, which is more or less in the hard bop vein, crosses between the cool saxophone conversations of Pete Christlieb and Warne Marsh and the hot, tough tenor battles of Eddie "Lockjaw" Davis and Johnny Griffin. It is stimulating, smart and rewarding, although it does not necessarily break new musical ground or have the makings of an instant classic.

ADVERTISEMENT
Although the liner notes don't list the solos in order, the last track, featuring Sommer by himself, serves as a guide in differentiating one tenor saxophone solo from the other on the rest of the album. Perry, by virtue of his experience, is the slightly more dominant voice of the two. Sommer, however, successfully holds his own; playing with a slightly deeper tone, he is a somewhat angular soloist compared to the more fluid Perry. They solo without getting in each other's way, and it's rewarding to hear their individual approaches to the instrument and to the music.

Sommer and Perry are backed by sympathetic rhythm section led by the very able Eric Gunnison, who shines on the last track. Gunnison's intelligently crafted improvisations, while accompanying Sommer, add another dimension to the music without detracting from the sound of the horn.

The pieces on the record include four lesser-known classics by Kenny Dorham, Thelonious Monk, Bud Powell and Wayne Shorter, along with two originals by Sommer and two well-worn standards. The mixed program features enough variety to maintain interest throughout, yet it maintains a thematic unity so that none of the tracks sound out of place.

Although not an earth-shattering debut, this creative session not only presents a talented new voice in jazz but also reintroduces a master of the craft who deserves better recognition.

Escapade; The Fruit; Dance Cadaverous; Think Of One; Shoskin; Carpe Coffee; Along Together; Round Midnight.