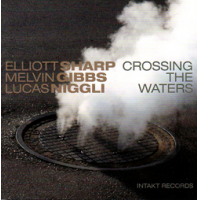 The performer roster of Switzerland's progressive record label Intakt Records was showcased in 2012 at John Zorn's New York City venue, The Stone. Venerable Swiss drummer and longtime Intakt recording artist Lucas Niggli teamed with New York City-based guitarist Elliott Sharp and bassist Melvin Gibbs for a maiden trio concert, wasting no time at all capturing their synergistic output by cutting this album the following day. The results are gratifying, as the multifaceted drummer— known for pushing the envelope—attains equal ground with Sharp and Gibbs, known for honing their respective roots in Manhattan's renegade downtown scene and elsewhere.

This trio takes care of business without dickering around, teeming with the musicians' aggressive interactions and swirling mobility. Sharp's distortion-laced sound platforms his complex chop-chords, speedy single note licks and sizzling harmonics. With Gibbs' deep bass and Niggli's rolling and tumbling polyrhythmic exercises, they discombobulate most semblances of conventional jazz-rock stylizations and slam the engine into overdrive amid a few restrained undertakings.

"Flow Fever" begins as a fragmented and introspective workout assembled on loosely aligned, avant sub-themes. Moving forward, the band jazzes it up via a free-form blowout, where Sharp's maniacal extrapolations profess angst and yearning atop Niggli's punishing rolls, while Gibbs lays out a pliant bottom. But they diminish the intensity framed by Sharp's tinkling notes and programmatic rhythmical maneuvers due to his closed-handed chord progressions. Here, the trio fulfils its mission by exploring an extensive spectrum of possibilities and counter- arguments, functioning as a common denominator throughout this colossally mesmeric program.