CrossCurrent 3: A Cry for Cultural Development 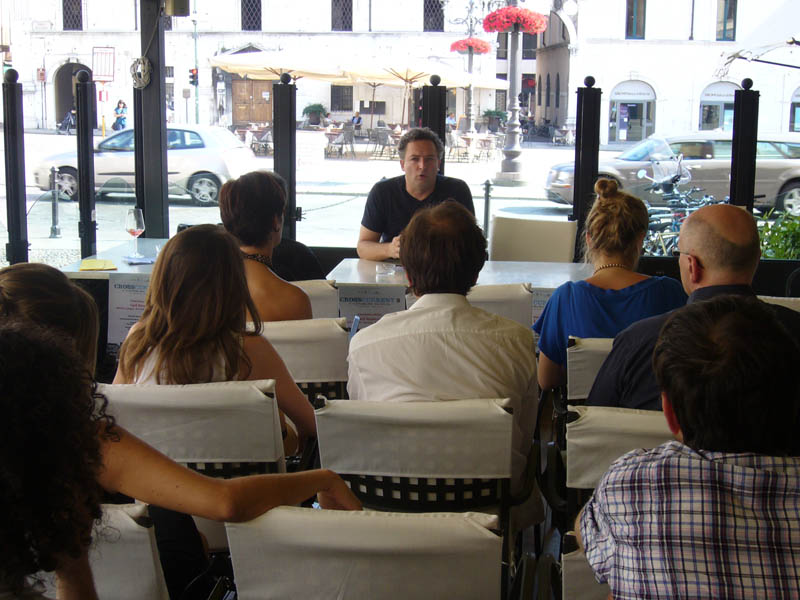 This space may not be the most fitting for an extended cultural/sociological analysis of how artistic expression and economical acknowledgment feeds each other, but there are events that can be taken as a good starting point for reflection. The New York edition of the forthcoming Crosscurrent Festival can be, with reasonable evidence, considered to be one of them.

On a bright and quiet afternoon in June, 2011, Luigi Settala explained the reasons for moving outside Italy to the press and all participants. He spoke of his liaison with Anthony Braxton's Tri Centric Foundation , which led to the realization of the woodwind multi-instrumentalist's Genoma Project; an upcoming agreement with Vancouver, Canada's Cultural Olympiad; and mentioned next year's encampment at London's Vortex Jazz Club . The former president of Crosscurrent is, along with EXB and AKAMU SAS, one of the people directly involved in organizing the Crosscurrent Festival, whose third edition will take place at Le Poisson Rouge , in New York's Greenwich Village, September 9-11, 2011.

The festival's slogan, "Italian Tinge to Contemporary Jazz," reveals both a reference to an artistic creative heritage and to an openly declared attitude that the organizers are claiming to be following. Jelly Roll Morton once said, "If you can't manage to put tinges of Spanish in your tunes, you will never be able to get the right seasoning," about the composing of his classic "Saint Louis Blues," and that statement was ultimately followed by like-minded by collaborations from Juan Tizol/Duke Ellington, Dizzy Gillespie/Mongo Santamaria and Miles Davis/Gil Evans. The cross-pollination of cultural nuances is, in fact, one the most vital aspects of the jazz heritage, but the main reference for Crosscurrent seems to be partnership, as a means to merging the different viewpoints behind artistic expression.

Skimming through guitarist Marc Ribot's 2007 All About Jazz interview —but one of many statements on the same subject—what comes to light most vividly is the difficult position reached by American and European business ethics. Considering the music business as an immense marketplace, where artists are regarded for how much they share the bill—or trying to acknowledge them on the aesthetic steps for which they are supposed to be evaluated—seems to no longer be satisfying, as these same subjects are now claiming themselves. The money stream in the music business is narrowing more and more, while overproduction, on the other hand, is making it very difficult to reach unity, as a matter of aesthetic parameters.

And even if this is not the right place for an extended analysis of the subject, or the reasons for the setup and weak points of the cultural standards identified above, it's a fact that Crosscurrent's organizers are claiming to broaden those criteria, in order to put some practical starting points on the table, for all future overhauls. They're also taking their efforts—even if well-aware that it's akin to throwing a stone in a big pot—as a possible attempt to work for all who want to share their resources, knowledge and goodwill for the same goal.

It's no chance, after all, that Crosscurrents' major sponsors—local and international—are the Tri-Centric Foundation; Radio 3 (Italian 3rd national radio broadcast); and Stefano Zenni's Società di Musicologia Afro Americana—SIDMA , whose leading actors are widely aware of the difficulties involved in promoting music as a matter of cultural sharing and statements. For every Anthony Braxton and George Lewis, both acknowledged with a McArthur's Fellowship, there always will be an Anthony Davis, whose struggling in promoting his operatic chamber works aren't always well-paid. Finding money is both an economical and a cultural issue.

Looking at the festival's program, and to the musicians directly involved in it, Crosscurrent will present, over three nights, both well-known improvising masters like trumpeter Wadada Leo Smith, with his Golden Quartet, sharing the bill with new pianist, Angelica Sanchez, and old fellow, drummer Susie Ibarra, and Wayne Horvitz, who will present his new project with saxophonists Briggan Krauss and Tony Malaby, and drummer Ches Smith; as well as younger artists looking for greater recognition, like saxophonist Matana Roberts and drummer Tyshawn Sorey, both working on projects related to music and art as a matter of political and social consciousness.