By JAMES NADAL
September 28, 2015
Sign in to view read count 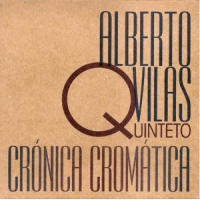 There might be something to the theory that separation brings about greater creative awareness. The region of Galicia, on the northwest corner of Spain, though not geographically isolated, does pride itself in its unique cultural traits as music and language, differentiating itself from the rest of Spain. Given the historical influence of Celtic music in this area, it is surprising that there is a quiet movement underway of those who are pursuing jazz as a choice of expression. The Alberto Vilas Quintet, based out of Galicia, in 2011 released "Experianza," which was genially received. Now with the follow-up Crónica Cromática, they are generating quite a buzz within the Spanish jazz community.

Directed by pianist and composer Alberto Vilas, the quintet has had time to settle in and this record displays a mature approach to the melding of composition and improvisation. As they are a working ensemble, the musicians have the instinctive ability to play off of each other in a way that the melodies sound articulated and accessible. Vilas as composer, writes with his companions in mind and allows ample possibility for the individual voices. His writing is subtle and spatial, with a moderate flowing concept throughout the songs, though there are dramatic passages exhibited in the soloing.

The piano of Vilas might be the dominant instrument, but it is the interplay with guitarist Felipe Villar and saxophonist Rosolino Marinello that make this an authentic jazz quintet excursion. From the opening track "Soños De Tartaruga" they offer just the right amount of accenting, without overplaying their parts. "Instante Distante," features Marinello on the soprano sax, an instrument which he dominates with ease, though he is quite adept on the alto as well. The thoughtful guitar of Villar is forefront on "Da Man Do Vento," a soothing ballad, carried along by the deft brushwork of drummer Javier Barral, who also shines on "Onírica," another tender narrative. Kudos also to bassist Juansy Santomé, whose assignment of anchoring this project is implemented with elegance and grace.

As Vilas has also been pianist in a tango collective for over thirty years, it is no surprise to discover traces of this idiosyncrasy in "Entre Vías," as on other tracks. The title number is a more straight ahead jazz piece where the band kicks it up, before bringing it to a calming conclusion in "Alma En Calma," aptly named for it displays the soothing solo piano of Vilas, who specializes in deliberate and cerebral arrangements.

In the modern age of recording, it is quite the norm for musicians to do solo projects, picking and choosing studio musicians to come in to lay down tracks which are later spliced together. Not so the Alberto Vilas Quintet, as an active cohesive unit, they perform their music with a sense of purpose and familiarity, and project assurance and stability. Crónica Cromática is a lesson in how cultural sequestration results in a breakthrough of creative expression.