By ALEX FRANQUELLI
December 19, 2013
Sign in to view read count 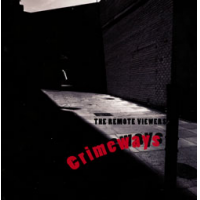 There is an almost indiscernible, cynical element in The Remote Viewers' music. It is probably hidden between the folds of its noir aesthetics, where contemporary fables of cops and thugs, the fuzz and hoodlums, seem to flourish in the dark corners of complex rhythmic patterns and atonalism. Or it is maybe the juxtaposition between the nocturnal, austere strut of the conversations entertained by the saxophones and the rare but effective interludes in a major key. Whatever it is, it works.

If City of Nets (Self Produced, 2012) represented the frenzy that is inherent in post-modern metropolitan settings, Crimeways portrays an analogue layer of society, one where reality succumbs to necessity. For this reason, The Remote Viewers' music does not go the extra mile to emerge as an alluring and pleasing piece of art but, on the contrary, its main purpose seems to be hyperrealism and an almost anthropological analysis of contemporary urbanism.

If there are analogies with other representatives of the free jazz scene, these are filtered through the dynamics of a sextet which betrays a penchant for a certain strain of experimentalism that nurtures itself from a wide variety of influences. From saxophonist Ivo Perelman's atonalism to composer Alvin Curran's flirtations with noise; from drummer and composer Basil Kirchin's cinematic scores to the Polish avant-garde: this London ensemble suggests that free jazz is still the best tool to depict the contrasts in today's society.

Tunes like "Woken by Water," "On a Quiet Front" or even the diluted flow that is the final "Mass Isolation" develop through complex harmonies and an intricate succession of cadences and accents that aim at cyclically repeating the purity of the musical gesture by inexorably stripping the sound of all its attributes. Convoluted as it is, the final result is a raw vibration that tends towards a formal minimalism, which, at times, dares looking towards contemporary classical trends, rather than jazz canons. A challenging album and a solid performance of one of the most intriguing jazz ensembles in England today, Crimeways is an unstoppable stream of consciousness in which our neuroses and daily fears are all but (too) accurately reflected.