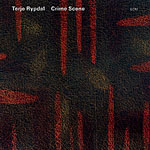 Norwegian guitarist and ECM principal, Terje Rypdal has defied narrow and expedient labels throughout his long career. Originally a rocker, he joined Jan Garbarek's quartet (and ECM) in 1969. In the course of his career, he has composed a number of symphonies, two operas, a violin concerto and many modern works that, as often as not, elude genre definitions. Rypdal's quantity and quality of jazz and free jazz compositions may skew his profile toward jazz, but his versatility and the settings in which he works exist are far more universal. Further substantiation of Rypdal's musical elasticity comes in Crime Scene, a live concept collection that combines the grand scale of the 17-piece Bergen Big Band, the straightforwardness of a rock band, and a bit of Clint Eastwood thrown in for good measure.

Crime Scene's four opening tracks are a good indication of what is to come in its fourteen "episodes." Starting with "Clint—The Menace," Eastwood leads us into "Prime Suspects," a piece that feels like a Sun Ra arrangement of Gershwin. Spiraling and almost dizzying, it repeatedly builds up like a sand castle, washing away and rebuilding. "Don Rypero" is as hard a hard-rock piece as you're likely to hear in a jazz recording. Rypdal's guitar keens and Ståle Storløkken chews up the Hammond B-3 in a way that would make Deep Purple's John Lord stand up and take notice. Storløkken takes a solo lead in "Suspicious Behavior," which eventually slows the pace to segue into a bass line. The pacing, as in a good movie, allows the chance to breath, regroup and start putting the pieces of the mystery together.

Further along, "Parli con me?!" gives a different meaning to gangster rap. Voice samples from films including The Godfather (1972) , Taxi Driver (1976), and other appropriately themed dialog overlay the staccato of snare, sinister and cinematic horns and the intermittent gunplay. The effect is genuinely menacing and, like a real crime scene, it's difficult to look the other way. "One Of Those" is a particularly effective demonstration of why Rypdal and long-time colleague/trumpeter Palle Mikkelborg work so well together. Mikkelborg has a borderless approach where the limits of his instrument are concerned, much as with Rypdal's guitar method. Mikkelborg bends notes, employs muted moodiness and echo. Throughout the collection, as well, drummer Jim Plank provides a subdued but well-structured foundation.

As Crime Scene approaches its conclusion, Mikkelborg calls to mind electric Miles Davis on the brooding "Investigation," before Rypdal takes his most satisfying and trancelike solo on "A Minor Incident." "Crime Solved" closes the proceedings with the same dark, moody ambiance as the opening, suggesting something less like closure and more like ominous rejoinder—possibly from one of the wise guys that have populated this story.

With Crime Scene, Rypdal has crafted a flawless soundtrack. Tension, chaos and a melancholy sense of regret evoke a musical and visual storyboard that flows seamlessly and enters a dark underworld. Standout pieces such as "It's Not Been Written Yet" create a film noir atmosphere, carried along by an almost subliminal melody. Voice samples spring up like sinister placeholders, a device that moves the story along rather than distracting from it. Crime Scene is a powerful and highly engaging departure for both ECM and Rypdal, and well worth investigating.

Clint--The Menace; Prime Suspects; Don Rypero; Suspicious Behaviour; The Good Cop; Is That A Fact; Parli Con Me?!; The Criminals; Action; One Of Those; It's Not Been Written Yet; Investigation; A Minor Incident; Crime Solved.