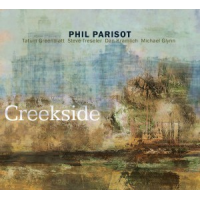 With his second recording as a leader, Seattle drummer/composer Phil Parisot follows up his debut record, Lingo (OA2, 2016), with Creekside (OA2, 2017), an interpretation of how nature manifests itself within urban environments. It's sound reflects the natural world perceived within the context of urban life, as a primal, inexhaustible source of enveloping sanctuary, seeing human participation as another link in the primordial march of timeless and innate universal emotive interaction. This visionary concept is explored and embellished upon by Parisot's standard quartet, with the addition of Seattle born and bred trumpeter Tatum Greenblatt, now making his mark in New York City as part of the Mingus Big Band, The Village Vanguard Orchestra, and Orrin Evans' Captain Black Big Band, to mention but a few. Saxophonist Steve Treseler, bassist Michael Glynn, and pianist Dan Kramlich round out the quintet.

Parisot's sound on drums is extremely musical, as one would expect from a drummer whose creative energy is expressed so imaginatively within his compositions. With this project, his compositional prowess is best described as image conjuring, a visionary display of timeless understanding of the jazz narrative. His playing in some regards sounds historic, as in the playing of Max Roach, or Roy Haynes, and falls in perfectly with the deft playing of pianist Kramlich,and the bold tonal presence of bassist Glynn. The trio core is the strength of the record, swinging hard, and creating space within a post bop sense of elasticity, with the energetic reaches of Greenblatt providing the proverbial icing on the cake.

"Earth Tones" has a thematic sense to it that speaks to the listener as a title track typically would, again conjuring images of the urban vision of the natural world Parisot seeks to express on this record. His playing sets a rhythmic sense of urban pace colored by bold strokes of color, of sky, of water, of human suffering and human joy, all experienced within a single Seattle block shrouded in northwest natural splendor. The melody and solos depart from the stated theme of origin, much as the human experience has separated itself conceptually from the natural landscape, only to find the inescapable truth of our integral place within the primal order of things. Greenblatt seems to find more of his natural voice on this recording, and his solo on "Earthtones" reintroduces us to his playing, a pleasure to hear within the confines of this quintet as opposed to his work in larger ensembles. His smart, well conceived solos are still an emotional tic away from modern trumpet greats, such as Sean Jones, Alex Sipiagin, or Thomas Marriott, but his creative momentum is riding a wave that is evolving very quickly. Jazz fans should be very excited about this young player, and what is yet to come. He plays with a command and fat tone reminiscent of Terell Stafford, carrying with it a timeless sense of harmonic understanding.

I'm not sure where the title "Samurai Fight Song" fits into the stated thematic pretense of this album, but musically it fits neatly into the musically stated groove that envelops this recording. Greenblatt's tonal colors truly are on display in their strongest sense on this track, again supported imaginatively by the rhythmic prowess of the aforementioned trio led by Parisot, and mates Glynn and Kramlich.

"Water" is the true musical departure from the stated hard bop balance this record engenders. It perhaps best provides the primordial images of the urban natural world that Parisot seeks to capture and give vision to. The melody, and associated improvised phrasing by Greenblatt and Treseler, upheld by Parisot's simple, yet uplifting support on shaker, summons the rambling flow of an urban stream, the ambling pedestrian pace of city life, the sea born breezes clearing a cloudy interlude with bold strokes of clear blue sky. It evokes a sense of hope and revival, emboldened by our relationship with the natural world that resides within and without us.

Creekside is like a second volume, a viable follow up to last year's release, Lingo. It is clear, however, that Parisot has taken a step forward conceptually, as he seamlessly binds his current work into a fascinating quiltwork of color, texture, and rhythmic variance.