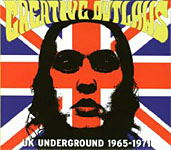 Although the title might be a little misleading—there are enough acts here with eyes on the financial prize, as opposed to the wholesale reconstruction of society after all—this is still a compilation that encapsulates a vibrant and diverse moment in the history of popular culture and indeed British social history. The underground, through the prism of this album, comes across as a thing which, though it might inevitably have lacked focus, played to natural human curiosity in a way which arguably wasn't so before and hasn't been so since.

Equally importantly, there are no hardy perennials here. White Noise's "Love Without Sound" is perhaps making its first appearance on a compilation and even in company as fast as this sometimes it still sounds unearthly, like the work of restlessly creative sprites not bounded by time or place. For all its jollification however, The Aquarian Age's "10,000 Words In A Cardboard Box" could be the work of individuals who went on to the more challenging world of chartered accountancy.

The choice of Comus' "In The Lost Queen's Eyes" is perhaps unfortunate as it doesn't encapsulate that band at its unhinged best, or worst, depending on point of view. Julie Driscoll, Brian Auger and the Trinity's "Czechoslovakia" is a different thing altogether though. Driscoll has always possessed one of the great white soul voices in this kind of setting and she puts it to good effect here over Auger and the Trinity's deft backing. When it breaks down it's to telling effect, the resulting musical abstraction being far more than a lot of acts from this period ever managed.

The Bonzo Dog Band's "We Are Normal" gets closer to something outside the norm through the application of good old fashioned silliness and the spirit of Dada. Although there's hardly a similarity of spirit about the Deviants' "Nothing Man," it has something of the shared approach about it in terms of how the recording studio itself is exploited as some kind of creative tool.

By comparison Hapshash & the Coloured Coat's "Houm" is not so much a stoned Indian mantra as it's a soundtrack of self-indulgence. With the benefit of hindsight afforded by forty-two years it could also almost serve as a soundtrack for why all the counter-cultural noises of the era amounted to so little in terms of lasting effect.

Winds Of Change; The Thoughts Of Emerlist Davjack; Whatcha Gonna Do About It?; 10, 000 Words In A Cardboard Box; Out Demons Out; Wet Socks; Love Without Sound; Day Is Done; Percy's Song; Nightmare; Desdemona; Watch 'n' Chain; I Am The Walrus; Forty Thousand Headmen; In The Lost Queen's Eyes; Little Games; Batpoem; Nothing Man; Czechoslovakia; We Are Normal; Houm.