By DAN MCCLENAGHAN
April 27, 2015
Sign in to view read count 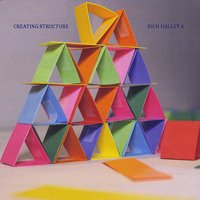 Saxophonist Rich Halley, home-based in Portland, Oregon, has put out seventeen CDs. A good handful of those, pre-2006, were released on the now-dormant Louie Records. These were mostly chordless trio and quartet affairs that showcased Halley's talent for creating category four maelstroms that gelled and bopped their way into surprisingly catchy, damned near mainstream grooves.

Pine Eagle Records, Halley's record label, was born in 2010, and the saxophonist and his like minded friends—trombonist Michael Vlatkovich, bassist Clyde Reed and drummer Carson Halley—have refined that free and often ferocious approach to jazz, rising beyond expectations with the extraordinary The Wisdom of Rocks (Pine Eagle Records, 2014).

Now we have something new, leaning back on the old. Though Halley's music fits well in the "free" category, with lots of room for improvisation, it has always had pre-existing structure, until he took the group into the studio to make Creating Structure, an hour of pure four way improvisation. But this band is so good at creating, on the fly, structures, that the sounds here often seem as mapped-out as the music on their previous CDs.

"Analog Counterpoint" opens the set, with a restrained Carson Halley rumble. The malleable Clyde Reed bass bounces in, followed by the hard, toothy bite of Rich Halley's tenor sax. It's got as good a groove as anything the group has ever recorded. "Rain Percolates Laterite" explores a more untamed territory, with Rich Halley's sax and Vlatokovich's trombone circling each other like a pair of wary mixed marshal arts heavyweights in front of Carson Halley's crackling drums. "Riding the Trade Winds" is looser yet. Halley is distinctive with his brawny blowing, one of the most recognizable voices on the instrument as his profile rises with each successive recording. Five and a half minutes in the music evolves into a near-Calypso groove, a la Sonny Rollins. For a group involved in free group improvisation, they can be surprisingly danceable at times.

It must be a lot of work setting up your own record company, but the freedom of the endeavor has paid off for Rich Halley and his cohorts. They release CDs on a steady schedule, each a bit better than the last. Creating Structures is yet another powerful and compelling statement by the Rich Halley 4.