By DAN MCCLENAGHAN
February 14, 2008
Sign in to view read count 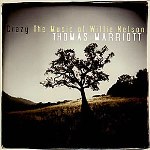 If you want to put your music into compartments, it might be hard to cozy up to a "jazz" CD getting tight with the tunes of "country" icon Willie Nelson. But smart music lovers throw the labels down the man hole, and maybe remember that none other than Miles Davis counted himself a Nelson fan—check out the six takes of the tune "Willie Nelson" on The Complete Jack Johnson Sessions (Columbia Records, 2003) boxed set.

Marriott and the band take on a couple of Nelson's best known compositions—the 1961 Patsy Cline hit "Crazy," and the Nelson-recorded "On the Road Again" (is there a person alive who hasn't heard those tunes?), along with a bunch of lesser-known gems. But if you're expecting understated, subtle country flavors, think again. The sound has a distinctly modern and often brash tone, thanks in no small part to the three members of the under-recorded Matt Jorgensen + 451 ensemble: drummer Jorgensen, saxophonist Mark Taylor, and keyboardist Ryan Burns. Especially Burns, who switches from the acoustic piano mode of his Tree-O (Odd Bird Records, 2007) in favor of some serious musical adventurousness with his Fender Rhodes and Moog synthesizer.

The disc closes with "On the Road Again," probably Nelson's most familiar melody. Marriott and company change the original's quiet country charm into an expansive, lush, electric wash of sound that seems as if it could have been issued from the underbelly of an alien spacecraft that has picked up an errant Willie broadcast out in space, and is now hovering in a starry sky, broadcasting its otherworldly renditions down to an awe-struck earthly crowd.

This set of eleven Willie Nelson songs—done up in a quite adventurous jazz mode—is an unusually fine and original listening experience.

Phases & Stages, Circles & Cycles; Everywhere I Go; Write Your Own Songs; You Wouldn