"Playing with all these groups, rehearsing and traveling, takes up a lot of time," Handy says. "My biggest problem right now," he concedes, "is that I've got too many ideas for my own projects floating around in my head, and not enough time to get to them. One thing I'd like to do is record a straight-ahead quartet date. There's also the group I had back in the early '90s; the trio with Ralph Peterson and Charles Fambrough, called Free For All. That's a band I've been thinking about resurrecting. I've also been thinking about doing a trio thing with Mingus Big Band drummer Johnathan Blake and Boris Kozlov. We know a lot of Mingus music between us and a lot of other music as well. 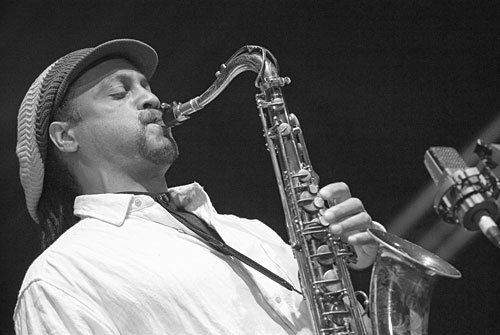 "For a while, I've been talking with two very well-known trumpet players about doing a quintet project. I'm not going to mention their names, because I want to wait until it comes together. It's also a dream of mine to have a three-flute band with a Latin rhythm section—maybe with James Newton, or Lew Tabackin, or Hubert Laws. There are a lot of people I've considered. But the main guy I want to get in there is Maraca, so he can kick my ass and make me learn how to play the flute."

Handy also mentions maybe doing a project with a Brazilian samba band. Then there are the Shakespeare adaptations: "I have another idea to do a hip hop version of Shakespeare with break dancers, either based on The Sonnets, Romeo and Juliet, or A Midsummer Night's Dream. The feud between the Montagues and the Capulets, the warring sides, would work. We could have two breakdance teams fighting, with Geoffrey Rush and Jeffrey Wright doing the narration with original music.

"Basically my main problem is trying to figure out what I want to do first."

As if he doesn't have enough going on, Handy is putting together a space in midtown Manhattan where he'll show Fchagerl saxophones and Ted Klum Focus Tone Mouthpieces. "It's a place where guys can come by and play the horns. I use Fchagerl saxophones, and I'm really excited about them. Fchagerl is just one guy, a Viennese master builder who's been making instruments for classical players in Europe. He's has maybe 20 or 30 people working for him. He's got such an amazing ear. A friend of mine, Harry Sokal, who plays with the Vienna Art Orchestra, has been his main consultant. Harry's a diehard Selmer fanatic. And he basically told Fchagerl 'Listen, if you're going to build a saxophone, here's what it's supposed to sound like.' And Harry played his saxophone and Fchagerl went 'I understand completely.'

"So, when he built his horn, he used the Selmer as the prototype and inspiration and he came up with something that is really, really interesting. Everybody who's played one of these horns has loved it so far—including diehard Selmer fans who thought they would never play anything else. It's a nice way to go for guys like me who are tired of dragging around their old instruments, because one or two hits in the summer and my vintage instrument is like an old lady—she's beautiful but she's delicate. She doesn't want to travel that much. The newer horns are much more robust in terms of them being taken it on the road and getting knocked around."

Regrettably, due to the state of the recording industry at the beginning of the twenty-first century, much of Handy's important recorded legacy is out of print. But jazz fans are resourceful, and those who have a penchant for the art of great saxophone playing will seek out and find his work. In whatever incarnation it will take on in the future, Craig Handy's music is a rich and lasting part of the tradition, and it will be around for music lovers to savor and enjoy for a very long time.