Ginger Baker and the QJ2O: Coward Of The County

By ROBERT MIDDLETON
June 1, 1999
Sign in to view read count 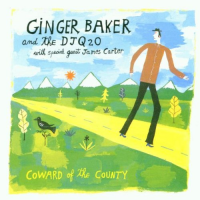 I wasn't so sure about this CD with it's countryish name and cover art. What has Ginger been up to since his pair of great CD's with Bill Frisell and Charlie Haden in '94 and '96? This CD is the answer and it has definitely been worth the wait! This CD wins my vote for not only the best CD of 1999 but for all of the 90's. It's that good. A good portion of the credit for this album goes to Ron Miles, a gifted trumpeter and arranger who penned the majority of the tunes on "Coward." Two of the eight are by Baker. It's a pretty standard band as a Quintet with Baker on Drums, Miles on trumpet, Fred Hess on Tenor, Artie Moore on Bass and Eric Gunnison on Piano. But then it stretches out into an Octet on several cuts with Shamie Royson on organ, Todd Ayers on guitar and Glenn Taylor on pedal steel. And just to make things interesting, James Carter on baritone joins them for several cuts, often venturing into free territory.

The results are spectacular. Like all great jazz you can't pin it down to one thing, but the wonderful synergy of the band and the material is mind blowing. Shoot, I just don't have words for this music, and even trying to describe the tracks wouldn't do them justice. Swinging, driving, rocking, mellow, intense, melodic, beautiful. Unlike so much of jazz today, that feels like a rehash of the past, this CD has a totally modern feel to it while staying firmly rooted in the improvisational tradition. No one holds back. James Carter plays with soul and abandon. The quiet moments as on "Coward of the County" and "Jesus, I Just Want to Go to Sleep" are sublime. "Ginger Spice" just cooks and "Jesus Loves Me" (no, not the old hymn) has more time signatures and changes than any piece of music you've heard. "Daylight" is terrifying, awesome.

If this CD doesn't win a Grammy and the Downbeat reader's and critic's poll, I'm going on a hunger strike. Long live Ginger Baker and the DJQ2O!!!