By JEFF DAYTON-JOHNSON
November 17, 2010
Sign in to view read count 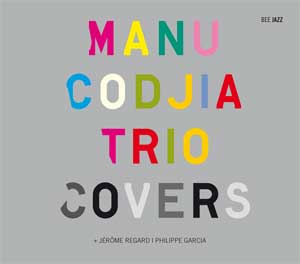 Is Steamin' with the Miles Davis Quintet (Prestige, 1956) a "covers" album? Not a single Davis-penned original on the record. But, of course, performing other composers' material is the jazz musician's stock in trade. No, the notion of "covers" is more recent, and its use in jazz today evokes the ironic rock-weaned hipster, exemplified by The Bad Plus's borrowings from the songbooks of Black Sabbath or Nirvana.

Now, guitarist Manu Codjia enters the fray with his own covers album. At first blush, Codjia, whose style owes as much or more to rock guitarists Jimmy Page or Jimi Hendrix as it does to jazz players, might seem to fit the bill of the studied po-mo pop-savvy slacker. But that would be a misleading impression. This record has its lighthearted moments, but it's not arch or ironic.

Indeed, though his solos frequently wail in rock-derived electric glory, Codjia's career is that of a resolute jazz man, with a decidedly old-school attention to craft. He has taken nearly five years to record his three albums as leader, each meticulously arranged and performed. Like the earlier records—Songlines (Bee Jazz, 2006); Manu Codjia (Bee Jazz, 2009)—Covers is built around the appealing format of an acoustic jazz trio with an electric lead instrument. The bass and drums are sensitively recorded, while the full sonic splendor of Codjia's electric guitar is evenly presented in the mix. He is, as ever, an imaginative soloist as concerned with the shape and texture of sounds as with the melodic lines. The novelty in his playing on this disc is a slightly grittier, John Scofield-like approach.

Some songs are pleasingly pretty, like Tom Waits' "Martha" or Leonard Cohen's "Halleluyah." Bob Marley's "Redemption Song" is true to the original's folksy character, only to explode in a swirling psychedelic interlude (a second Marley cover here, "Natural Mystic," reveals a bass line that owes its lineage to the portentous bass motif from the "Acknowledgement" section of John Coltrane's A Love Supreme (Impulse!, 1964)). The only unambiguously "jazz" number is "Children's Play Song," a lesser-known Bill Evans tune from his Verve years that's among this album's subtler pleasures.

Drummer Philippe Garcia—formidably creative on the earlier Manu Codjia—often sounds uninspired by the simpler rhythmic material he has to work with here. Michael Jackson's "Beat It" is given a wittily forward beat, de-emphasizing the number's R&B elements, and on the Evans track his delicate jazz chops are evident, but elsewhere Garcia sticks to somewhat bland rock patterns.

Most compositions on previous Codjia albums were originals—elliptical, open-ended numbers like some high-modal mid-sixties Miles Davis tunes. The intrinsic approachability of the "covers" conceit might attract some first-timers to the work of this guitarist; they will not be disappointed by what they find in his larger catalog.