By IAN PATTERSON
January 23, 2013
Sign in to view read count 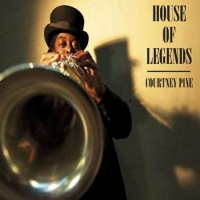 Though multi-reedist Courtney Pine has been playing soprano for almost 30 years, this is the first occasion he's recorded an entire album with the instrument. Following his bass clarinet adventures on the European roots album Europa (Destin-E, 2011) it's clear that the modern British jazz legend doesn't tire of setting himself new challenges. Taking as his inspiration the roots of the British Afro-Caribbean community, Pine visits calypso, soca, zouk, reggae and South African rhythms in a joyous dance party that's liberally infused with his electrifying be-bop lines.

Pine's music has mostly always had a contemporary urban accent, yet albums such as the aforementioned Europa, Transition in Tradition (Destin-E Records, 2009)—which traced jazz's roots—and now House of Legends suggest that of late he's found greater inspiration in the past than in the hip-hop, jungle and drum 'n' bass that's colored much of his discography. Pine previously explored his Jamaican roots on the reggae-inspired jazz of Closer to Home (Mango, 1992), but there's a greater stylistic breadth and an infectious exuberance on display here. House of Legend can also be seen as an extension of the Jazz Warriors' Out Of Many, One People (Island, 1987), which celebrated the UK's Afro-Caribbean jazz talent. It's also a posthumous and heartfelt dedication to some of the UK's most important jazz musicians and composers—trumpeter Harry Beckett, saxophonists Sir John Dankworth, Andy Hamilton and Lol Coxhill, and London-based American trumpeter/vocalist Abram Wilson who succumbed to cancer at the tragically early age of 38 in 2012. Pine has never made any bones about his musical debts, though "Ca C'est Bon Ca" bears such close resemblance to saxophonist Sidney Bechet's "Petite Fleur" that the New Orleans jazz pioneer surely deserves a co-writing credit.

And, as a celebration of the 50th anniversary of Jamaica's independence, House of Legend is another socially and politically conscious recording in the vein of Afropeans (Destin-E Records, 2008), a rousing live recording that marked the 200th anniversary of the Abolition of the Slave Trade Act. Several of the compositions here are similarly inspired by black historical figures, activists and victims alike, but with the exception of "The Tale of Stephen Lawrence"—a duet between Pine and pianist Mervyn Africa that serves as a poignant eulogy to British teenager Lawrence, horrifically murdered in a racist attack—the music is upbeat and celebratory in tone.

Trombonist Trevor Edwards and trumpeter Mark Crown sound the reveille to the party on "Kingstonian Swing." Pianist Mario Canonge, guitarist Cameron Pierre and bassist Miles Danso provide the ska rhythms and accents, as Pine unfurls a fast yet melodic solo. A short slice of dub reggae serves as a breather before Crown solos with equal panache. "Liamuiga (Cook Up)" is a melodically appealing calypso reminiscent of Sonny Rollins; Annise Hadeed's steel pan brings the sunny flavor of the Caribbean to the mix and there's joy too in Pierre's fluid lines. It's Pine's wildly exuberant solo, however, that really steals the show.

It doesn't all work so well. "Samuel Sharpe" sounds like a disco version of the Star Trek theme and Pine's use of EWI has the unwelcome effect of converting this homage to the former Jamaican slave-turned-protester into cheesy, hotel-synthesizer kitsch. Drummer Rod Youngs' metronomic beat has a programmed feel that does little to dispel the notion of a one-man synthesizer show. Surprisingly, given the range of styles Pine visits on House of Legends the music is often rhythmically unchallenging and the predictable beat on a number of tracks can become a little monotonous.

The calypso jaunt "Claudia Jones" skips along at a breezy pace with standout solos from Pierre and Pine. The native Indian intro to "Song of the Maroons" conjured by Michael Bammi Rose's flute, bass drum and hand-held cymbals/shakers gives way to an uplifting melody driven by strummed guitar. Rose and Pine's solos are joyful expressions of play. "House of Hutch" and "From Father to Son" continue the party vein. The former features a swinging, Latin-tinged piano solo from Canonge and another breathless torrent of notes from Pine that raises the temperature. The latter tune—another calypso-influenced number—pits Pine and veteran trumpeter Eddie Tan Tan Thornton together in a passionate give-and-take.

"Ma-Di-Ba" fuses infectious melody and groove in a celebration of Nelson Mandela and South Africa's stirring music of the townships. Pine saves the most frenetic to last—a double time meringue take on "Tico Tico." Pierre, Canonge and the leader each contribute solos on a full-throttle rendition that provides a rousing group exclamation, and one that can only be followed by someone pulling the plug.

Pine doesn't set out to reinvent the wheel on his latest roots adventure, though he does give some of his finest solos yet committed to record, surely stretching the reach of the soprano saxophone to its limits. House of Legends may not be the most innovative or progressive recording Pine has ever done, but it's certainly the most enjoyable.