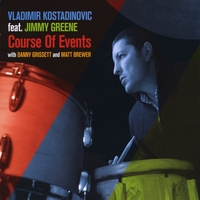 The first choice of instrument may not always be the one that lasts through life. Serbian born drummer Vladimir Kostadinovic began playing the accordion when he was seven. When he got his first drum set from his brother four years later, the instrument became his passion. He attended music school in Belgrade, and graduated from the jazz department before he went to the Berklee College of Music on a scholarship. And when it came time to hone his skills, Kostadinovic played in theater productions and with big bands including that of Bob Mintzer.

Kostadinovic makes an impressive debut with Course of Events, leading a quartet that is in tune with his music. He comes off as an imaginative drummer filling in space, stimulating the frontline and urging it on. His imagination raises the quotient, as he sets up different stylistic paths to the signpost of resolution.

Two tunes that are opposite in style offer a composite picture of Kostadinovic as composer. "Tour Through the Universe," focuses on hard driving bop, led by tenor saxophonist Jimmy Greene, whose broad phrases propel the song forward. The momentum is given a different direction by pianist Danny Grissett, who enlivens the melody with light escarpments. All the while, Kostadinovic keeps the pulse snappy, without shunting the beat into overdrive. Although this has a crisp sonic presence, they gild "Course of Events" with gentle warmth while presenting the melody. Greene and Grissett are the main purveyors, as they create an attractive aura, but bassist Matt Brewer helps underpin the pulse during his solo. The evocative ballad may well have floated along beautifully enough, but Kostadinovic adds a nice edge with his play particularly in his use of the cymbals.

Standard time finds them turning "Duke Ellingtons's Sound of Love" into a warm earthy experience. Greene's lyrical intonation oozes tender feeling, but he is sagacious enough to add quick acclamations to tone the body and add to the groove. Into this intimate setting comes Grissett, who orchestrates the melody with gentle energy. As the rhythm section adds to the ambience, Kostadinovic ignites it, not only with the swish of his brushes but with occasional exclamations.

With Course of Events Kostadinovic makes an impressive debut that augurs well for the future.

Listen to the Band; Course of Events; The Only Sound; Duke Ellington's Sound of Love; Tour Through the Universe; Gruner Daumen; Hey, It's Me You Are Talking To.