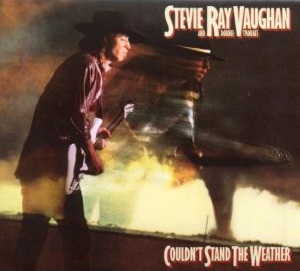 Couldn't Stand the Weather is a great album which has been reissued before. But this time, there are considerable extras in the package that make it jump out and shout. Each of the two discs runs for nearly 80 minutes: disc one includes the original album and plenty of bonus tracks; while disc two contains a previously unreleased concert appearance. Extensive liner notes by Andy Aledort of Guitar World form a biography of Vaughan, and provide interesting commentary on the music.

With eight bonus tracks from a few of Vaughan's other albums, and three previously unreleased selections in addition to a remastered Couldn't Stand the Weather, disc one has plenty to offer. Vaughan sings with soulful blues meaning tucked deep inside, while punctuating each selection with his fire-spitting guitar. Disc two takes it up a few notches with a superb concert performance from August 17, 1984 at Montreal's The Spectrum, as part of the band's tour. Most of the songs on the album are covered at this concert, but each selection runs long and daring; it's a typical concert scene where the audience serves to push the band higher and the band responds with creative juices overflowing.

Like Jimi Hendrix, Vaughan worked magic with his guitar and turned audiences up high everywhere he went. He never forgot his blues roots, and this concert has the kind of variety that brings generations together. From Delta-flavored moans to hard Texas swing and powerful, rock-inspired anthems he covered a lot of territory. "Voodoo Chile" represents Hendrix, "Love Struck Baby" represents a swinging Texas affair, "Honey Bee" feels as if it came right out of Chicago, and "Tin Pan Alley," also known as "Roughest Place in Town," has roots along the Mississippi River, where the blues began.