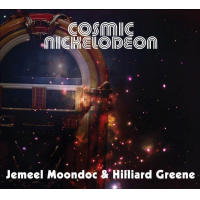 Saxophonist Jemeel Moondoc and bassist Hilliard Greene have quite a bit to talk about in their encounter Cosmic Nickelodeon. Their shared forays into free jazz, Moondoc first with Cecil Taylor, then as a leader collaborating with William Parker and Roy Campbell, and Greene with Charles Gayle give context to this session. Moreover, the pair come together here for a set of unhurried and deliberate exchanges.

Cosmic Nickelodeon is a comfort food variety of recording. Beginning with "Blues For Katie," a gospel tinge permeates the session. Moondoc's alto mixes Ornette Coleman's articulation with that of late-period Art Pepper. He chooses a calming bluesy touch that Greene is committed to sustain. The bassist's solo "Spiritual Medley" is actually a duo with his overdubbed self and a luscious piece of music. Moondoc's composition "Here Now Gone Now" continues on that theme, with Greene's bowing choir to the saxophonist's preaching. Elsewhere, the instant composition of "The Foundation Of A Lost World" pulls "'where's Waldo" musical references from Thelonious Monk, Ornette, and is there some Sonny Rollins touched on? Mostly, here is a conversation between the two. Greene delivers the most monstrous pizzicato solo with "Pizz," pulling earth tremors and aftershocks of vibrational sound on the solo piece. The pair end the disc with the title track, a truly jubilant piece of dialogue.