By EYAL HAREUVENI
November 19, 2012
Sign in to view read count 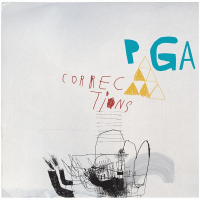 PGA—Norwegian bassist Fredrik Luhr Dietrichson and drummer Jan Martin Gismervik—has played together for many years as the rhythm section of Wolfram Trio, which released its self-titled debut earlier this year on the Va Fongool imprint, as well as the yet-to-record Shotgun Wedding trio (also called Gismervik Gruvedrift). On their debut as a duo, they decided to delve deeply into the basic elements of free improvisation, to explore and expand their instruments' vocabularies with varied and radical extended techniques.

The duo is fascinated with sound—any sound, strange and weird as it may be. No sound is obvious, there is no attempt to explore or perfect any orthodox method of playing double bass or drums and all nine improvisations are defined by loose structures. The sounds' origins are blurred: they can come from rubbing the body of bass or from bowing the frame of the mallets, attaining the same pitch on "Out of Tune" and "Ending?" The sounds can be minimalistic, with a focus on industrial sounds on "Pretty Good Alternative" and "Poor Guy Alone"; muscular and nervous on "Interference/Picking God Apart"; filled with otherworldly cinematic tension on "Catalogue"; or contemplative and disturbing on "Poor Guy Alone (Again). All sounds are explored with great intensity and conviction.

The addition of trombonist Henrik Munkeby Norstebo and trumpeter Thorsten Lavik Larsen on the two "Suggestion"" pieces assists in further enhancing PGA's experimental approach. Both Nørstebø and Larsen employ extended breathing techniques that contribute to the mysterious and chaotic atmosphere of their two pieces.