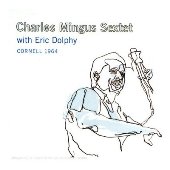 Like its historic 2005 discovery of the Thelonious Monk Quartet with John Coltrane at Carnegie Hall, Blue Note Records has unearthed another masterpiece from the vaults with Charles Mingus Sextet with Eric Dolphy: Cornell 1964. The double-disc collection is a monumental portrayal of an all-star group at the height of its powers, led by the bassist/composer who is widely regarded as one of the most complex, idiosyncratic and influential figures in 20th century American music. Although this band is represented on other recordings, Cornell 1964 captures a singular performance unequaled in Mingus' lengthy discography.

In A.B. Spellman's 1966 tome Four Lives in the Bebop Business, Mingus disciple Jackie McLean is quoted as saying, "Jazz is a party music, and that is certainly evident on this recording, as the bandleader and his cohorts are clearly having fun. Mingus' lively vocal exhortations can be heard in the background, spurring on the soloists and delighting the audience throughout. At the same time, the music itself is rich and dense; the six musicians often sounding like many more, with a sense of detailed orchestration that marks the heavy Ellingtonian influence on Mingus' music.

Dolphy's inimitable presence is at the forefront here, with his customary array of alto saxophone, flute and bass clarinet. One highlight is his telepathic interplay with Mingus as they duet on the opening melody of the tour-de-force "Meditations. The bass master's keening, bowed strings intertwine with Dolphy's melancholic flute to create a single, haunting voice, backed by the lush, repetitive horn figures of Clifford Jordan and Johnny Coles. That track, along with the Mingus staple "Fables of Faubus constitutes the centerpiece of the album, with each composition receiving epic, half-hour treatments full of shifting moods and tempos.

The presence of Coles here is a particular revelation, especially considering his absence on most of this band's ensuing recordings after he dropped off the subsequent tour due to illness. He tears through "When Irish Eyes Are Smiling with a huge, golden tone full of harmonic invention. This rare jazz version of the famous folk tune was played in honor of St. Patrick's Day, and joins Mingus' sole recorded version of Fats Waller's "Jitterbug Waltz on the album as stellar examples of the group's playful fervor in ¾ time.

Not to be left out of the spotlight, Jaki Byard showcases his trademark encyclopedic knowledge of the piano with a solo rendition of his original, "ATFW, that encapsulates and then transcends the soulful techniques of past masters Art Tatum and Fats Waller. On "Fables of Faubus, Byard ingeniously trades quotes with Mingus as they insert well-timed melodic references to everything from "Yankee Doodle Dandy to Chopin's "Funeral March in the solo sections of this darkly comic political opus.

Track Listing: CD1: ATFW; Sophisticated Lady; Fables of Faubus; Orange Was the Color of Her Dress, Then Blue Silk; Take the