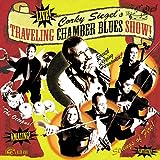 Harmonicat Corky Siegel is a four-decade veteran of the Chicago blues scene and co-leads the Siegel-Schwall Blues Band with guitarist Jim Schwall. Siegel held a long residency during the storied heyday of Pepper's Lounge in Chicago—ripping up and tearing down the blues with Muddy Waters, Howlin' Wolf, Willie Dixon and other legends—during which he was befriended by admirer Seiji Ozawa, conductor of the Chicago Symphony Orchestra. In 1968, Siegel-Schwall became the first blues band to play with a symphony orchestra by performing with Ozawa and the CSO.

In the early 1980s, Siegel founded Chamber Blues, casting his harmonica and piano among a string quartet and percussionist. "I envisioned an emotional classical blues blend with the sweet wooden sound and intimacy of a string quartet, he recalls, "and that's how Chamber Blues was born.

This new live recording showcases Siegel's harmonica and vocals with a string quartet and percussionist, plus two additional violinists and guest bassist/vocalist Rollo Radford. Hearing the chamber-blues genre, new and different, creep softly into life between your ears can sound odd. Violin, cello, and harmonica all make familiar sounds, but in this different sort of combination—chamber music and blues music playing together—the familiar sounds different.

Some passages of "Serenade, for example, are dominated by strings and sound like chamber music, but in other movements the strings pluck out what on a different instrument and in a different context would be a jaunty rhythm guitar hook behind Siegel's lead harmonica moans. "Manhattan Island sounds like more of a lament backed by howlin' harmonica than a blues—but what's the difference, really?

The Woofy Girl Stroll builds sort of a line dance from the piano up, as the left hand rocks the "up and down galloping piano chords that one almost automatically associates with movies about "The Old West, while the right hand spins yard upon yard of boogie-woogie blues. Radford plays and sings his own composition "Train, depicting the darkly hilarious monologue of a captured Old West train robber railing against spending time in prison: "I hate to miss the Christmas rush this year, but I will see you in the spring...

Though it can sound archaic at times, Siegel's harmonica wails enough hard and long enough to blow off any dust. You will find a companion document to this CD—with stories, photos and recording details—at chamberblues.com.