With the current crisis of the major record labels and the folding of venues all over the world, it could be argued that jazz, as an art form, has entered the age of survival where it is simply a basic matter of keeping the music alive, rather than trying to let it flourish and expand. However, there are also signs that the so-called crisis of the music business is the fuel that has fed the fire of a whole new wave of musicians and entrepreneurs who are re- thinking how jazz should be communicated and distributed to an audience. What drives them is their passion. They're not in it for the money, but for the love of the music.

The new entrepreneurial spirit of jazz was strongly felt at the Copenhagen Jazz Festival 2010 where a host of groundbreaking initiatives showed that jazz is not only able to survive, but also has the potential to regain its position as the popular music of our times, and this is no coincidence: It is hard to find a musical genre that is more balanced when it comes to giving a proper reflection of society. No other genre is able to reference and embrace its own historicity in the same way, while still being open to the post-modern permutations of genres. While classical music is about the past and pop music about the present, jazz music is about both: It is the music of then and now. Thus, the whole continuum of music history was reflected and transgressed at the festival, where everything from traditional Dixieland and mainstream swing to fiery avant-garde and genre-bending grooves echoed throughout the city.

The Music of the City and the City of Music
It must be emphasized that attending Copenhagen Jazz Festival isn't just a matter of hearing music, but also, in a way, a state of mind. Much has been said about the fairytale-like nature of the city where bicycles, rather than cars, are preferred, and green areas provide welcome hideouts for star-crossed lovers. However, what is most fascinating about the city is that, like New York, it has its own rhythm and its own beat, pulsating throughout the city. 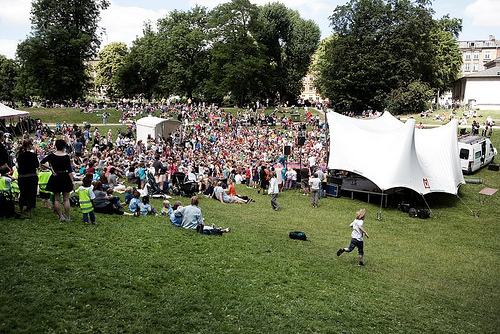 The rhythm of Copenhagen isn't the hectic sounds of modernity or the nostalgic musings of yesteryear. Like jazz itself, it is something in-between. It is a sensual kind of swing that oozes out of every pore of its body. Jazz is literally everywhere: From remixing-sessions done at the top of the buildings to the soft hum of an old Chet Baker-record, heard late night at the harbor, and the joyful licks of skilled amateurs on the street corners, music isn't only played in venues, it embodies the city. Copenhagen is one big scene where one is just as likely to experience jazz in the zoo or the local mall as in the historical and beautiful surroundings of venues like the recently resurrected Jazzhus Montmartre. 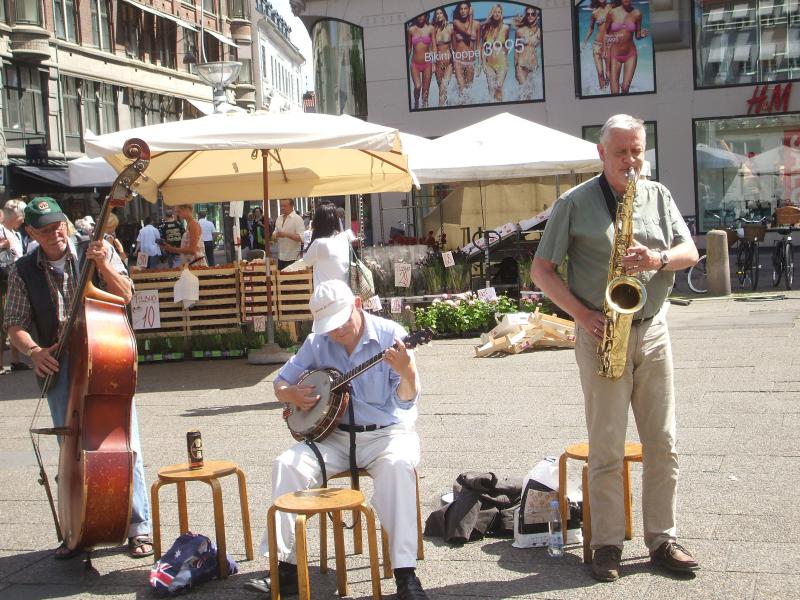 As usual with the festival, the abundance of offers is a positive problem. To choose one good gig at any given day of the festival is the same as missing minimum five. However, staying for a long period in the city allows for a rich sample of the festival's luxurious program and it was also the case this time where the ticket included legends like singer/songwriter Caetano Veloso, pianists Herbie Hancock, Martial Solal and Kenny Barron, but, perhaps more interestingly, also modern groundbreakers like saxophonists Mark Turner and Joshua Redman, pianists Jason Moran and Vijay Iyer and avant-garde icons like pianist Marilyn Crispell, and saxophonist John Tchicai, not to mention a talented pool of Danish jazz musicians in trans-national collaborations, including the young pianist Rasmus Ehlers playing with saxophonist George Garzone, French guitarist Marc Ducret's new ensemble featuring drummer Peter Bruun and trumpeter Kasper Tranberg and last, but not least, the massive undertaking of saxophonist Benjamin Koppel who, together with pianist Kenny Werner hosted a star-studded mini-festival in the suburb of Valby, bringing in such heavyweights as drummer Al Foster, saxophonists Chris Potter and Bobby Watson, guitarist John Abercrombie and bassist Scott Colley.

The Shape of Jazz to Come
While the festival featured many established names, part of the fascination of attending a musical event like the one in Copenhagen is that it offers a singular opportunity to access the future voices of jazz, especially the many talented musicians emerging from the reputable Rhythmic Music Conservatory of Copenhagen (RMC). This year, a lot of the musical talent gathered around the venue Huset i Magstræde where it was possible to experience the lyrical post-bop musings of Lars Fiil Quartet, the bouncing world-rhythms of Girls in Airports and the wild punk-jazz of Magnus Fra Gaarden (Magnus from the Farm) who thrilled their audience by dressing up as animals and delivering a stellar stage-performance. 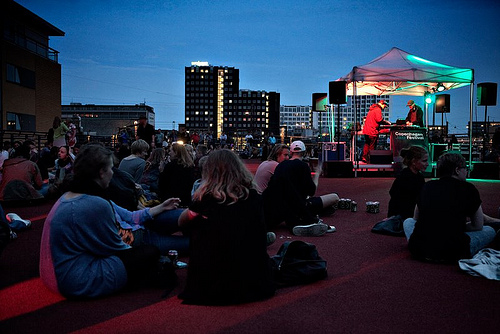 Two of the most pacesetting Danish jazz-labels, ILK and Barefoot Records, were also highly profiled at the festival. Barefoot Records held a series of concerts at the intimate music store Jazzkælderen. Here, the pianist Karen Bach and her trio premiered promising material from her self-published album Secret Rooms, a fine example of the new Danish melancholy. A more violent take on the piano was given by Morten Pedersen whose trio, The Mighty Mouse, gave an intense concert where explosions of chords gave way to atmospheric explorations of texture, with Norwegian drummer Håkon Berre making all sorts of sounds emerge from his kit. While the wild music of The Mighty Mouse might by perceived as difficult and hard to understand, it was intuitively appreciated by two kids who marvelled at the music, taking it in while lying on floor. The older audience was also open to the sounds, and a distinguished gentleman spontaneously bought the band a beer after a highlight of tight musical improvisation. 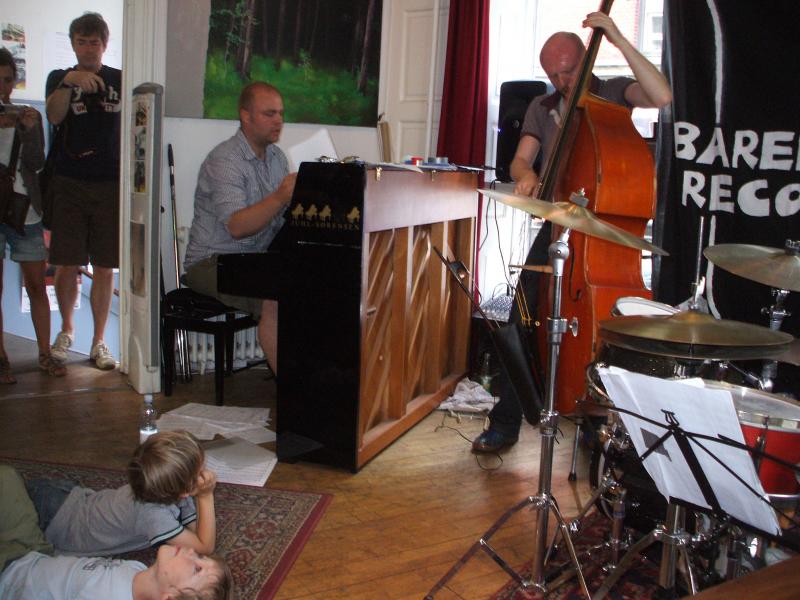 The special atmosphere at Jazzkælderen isn't a new invention. Last year, Barefoot Records also hosted a series of concerts at the store, but unfortunately this year's event will be the last as the store is now closing down. However, the musicians are taking matters into their own hands and are opening stores themselves. At Krystalgade, the label-collective ILK presented a series of intimate living room concerts where the audience literally was able to breathe musicians like drummer Kresten Osgood and bassist Thomas Morgan in the neck. The concerts were held as showcases with free admission and the possibility to buy records at special price.

There was also another strong commercial and artistic initiative during the festival, taken by a collective of ten young Danish jazz musicians who has opened their own store: Homemade Records. The idea is that the store will only sell music by the participating musicians and thus offer a small but exclusive oeuvre to the quality-seeking customer. To whet the appetite of a future audience, the musicians held a number of concerts. Young pianist August Rosenbaum played with his Beholder-project and in a duo with the eminent Thomas Morgan, who was very prolific during the festival, and there was also a chance to hear the fine band of guitarist Per Lyhne Løkkegaard, Petrus Kapell, whose album, A Call for Silence (Your Favourite Jazz, 2010) blends pop, country, rock and jazz into a wonderful eclectic stew.

Your Favourite Jazz is a high profile Danish jazz label run by the pianist Lars Winther. Besides Petrus Kapell, one of the latest signings on the label is the percussion wunderkind Emil de Waal whose music merges playful electronica and jazzy rhythms. The latest offering from de Waal is called Elguitar & Saxofon (Electric Guitar & Saxophone) and introduces the curious combination of de Waal in the company of three guitarists who also play the saxophone. The result is finely woven carpet of electronic and acoustic rhythms interspersed with delicate horn lines and catchy riffs. De Waal played with his project at Studenterhuset and live his compositions got a rough and edgier sound, shunning the more sophisticated vibe of the record. Tracks like the bouncing "Börsa" and the electronic afrobeat of "Birba" became vehicles for the energetic interplay of the saxophonists and guitarists, who were driven forward by the restless rhythms of de Waal. The playful nature of the concert was underlined when it ended with a completely improvised composition where the jam- band nature of the live-experience became fully unfolded.

Playfulness was also the keyword for the performance by Jörg Brinkmann Trio at Vor Frue Plads. The sympathetic Germans, who has released an album on the prestigious Act-label simply titled Ha! (Act, 2008), plays a unique kind of vibrant chamber-jazz where cellist and leader Brinkmann both embraces the romantic nature of his instrument and uses it as solid groove machine. Every composition is turned around and deconstructed, changing from wistful and elegiac moments to highly energetic grooves and tongue in cheek-waltzes. At the end of the concert, the audience was completely won over and promised to attend the next concert of the trio. 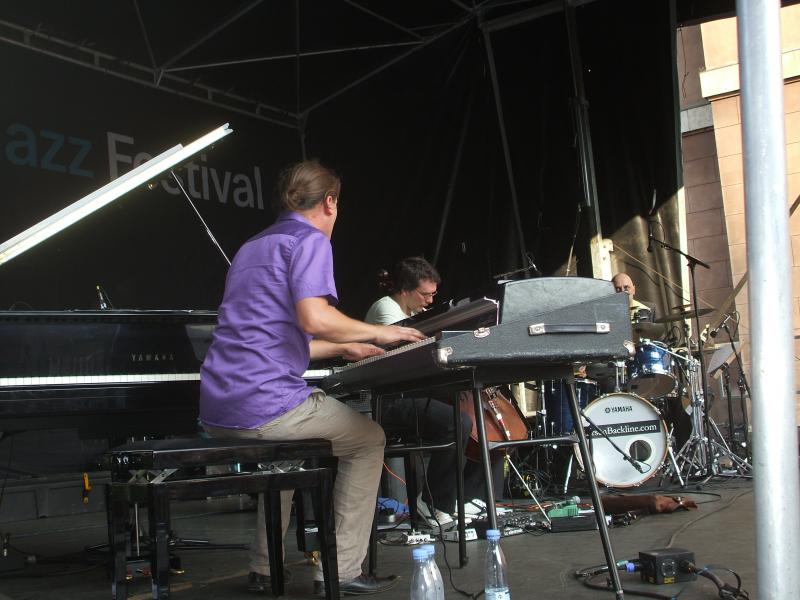 A more meditative approach to the future sound of jazz than the outgoing Emil de Waal and Jörg Brinkmann Trio was given by the British Portico Quartet, who built their concert around the critically acclaimed albums Knee Deep in the North Sea (Vortex, 2007) and Isla (Real World, 2009). As good as their debut is, it is the follow-up, Isla, which has defined and perfected the unique sound of the quartet. Carried by the florescent and electronically manipulated saxophone lines of Jack Wylie, the tight but yet elastic rhythm section of drummer Duncan Milo and bassist Milo Fitzpatrick and the signature sound of Nick Mulvey's hang drums, whose ethereal, ringing sound adds a flowing counterpoint to the groovy pulse of the rhythm section, the four musicians gave stunning interpretations of tracks like "Dawn Patrol," conjuring images of lonely birds flying in mountain mist, and the dynamic "Clipper," with Wyllie's saxophone singing over Fitzpatrick's funky bass patterns. While the compositions gave room to make the individuals shine, the aesthetic of the band is more songlike in its nature, with sophisticated structures emerging out of melodic motifs and rhythms. Portico Quartet has transferred the complex nature of jazz into the tight structures of pop, adding a feel of atmosphere from unknown movie soundtracks. Live, they gave a performance which fully justified the praise that has been heaped on them.

Well-tempered Jazz Pianos
As well as enjoying the future sounds of jazz, the festival also gave a special opportunity to hear some of the past, present and upcoming stars on the piano. The Jazzhus Montmartre had booked two living legends for several dates: Martial Solal and Kenny Barron, and both delivered the goods. Solal played two dates at Montmartre where he played in a duo constellation with Danish bassist Mads Vinding. Without any unnecessary talk, the pianist engaged in a musical conversation, deconstructing standards while wearing a quiet smile. Like Art Tatum, Solal is sometimes too much of a virtuoso for his own good, but it is hard not to be impressed by his technical skills and knotty sense of swing.