By EDWARD BLANCO
March 1, 2010
Sign in to view read count 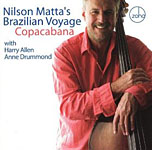 New York-based bassist Nilson Matta's Copacabana offers a musical adventure reflecting the many aspects of his native Brazil. Whether the culture, its different regions or natural wonders; Matta blends an exciting selection of new material with old Brazilian standards in a dedication to his homeland. The album—as well as Matta's combo (Nilson Matta's Brazilian Voyage—was born from a single event; a convention about Brazilian culture held at The Cooper Hewitt Museum in New York where he was asked to perform music from various regions of Brazil. Following on that theme, some of the pieces in this concept album contain folk music from Brazil's north-eastern area, dedications of the Pantanal delta wetland region and the bossa nova-tinged title piece clearly evoking the beaches of Rio.

The bassist employs the same quartet he used for the convention gig, with pianist Klaus Mueller anchoring an all Brazilian rhythm section featuring drummer Mauricio Zottarelli and percussionist Ze Mauricio. Adding to the scenery of this special musical voyage, Matta makes room for a special reed section by calling on tenor saxophone luminary Harry Allen and flautist Anne Drummond as special guests for this trip. The Brazilian trek begins with a dedication to the memory of Brazil's greatest guitarist on "Baden," in reference to Baden Powell. This track is followed by an especially spicy adaptation of composer Heitor Villa-Lobos' 1930 composition, "Trenzinho do Caipira," with both Allen and Drummond joining in the play for the first time.

With a nod to the natural beauty of the rivers in Brazil, the original "Aguas Brasileiras" (Brazilian Waters), is a lovely ballad containing a graceful Matta-plucked solo, accompanied by Zottarelli's soft brushwork and the pianist's delicate piano lines. "Brazil," aka "Aquarela do Brasil," is another well-known standard by Ari Barroso, remaining quite true to the original melody inhabited by the same gyrating samba rhythm that so defines this Brazilian burner. Matta ventures out alone on the short, humbling solo performance of his "Pantanal," employing heavy bow strokes on every note, while on the bossa nova-shaded "Copacabana" he performs on both guitar and bass, through the technical wizardry of overdubbing.

Joined by lush mellow phrasings from both Mueller and Matta, Allen contributes one of his own composition—the album's only non-Brazilian-tinged piece—delivering soft, flowery solos on the ballad "I Can See For Ever." Though the piece is a departure from the theme of the album, it nevertheless remains as one of its better tunes. The finale, and last standard on the program, "Asa Branca/ Baiao," provides Drummond with her most prominent showing and, along with Mueller's handy piano work, sets up the bassist for one final curtain call on the set's most provocative piece.