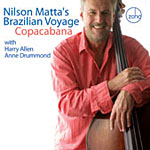 Brazilian music is given a shot of verve and vivacity by bassist Nilson Matta, as he succinctly captures the imperatives of the music through originals and standards. The music of his native land courses strongly through his veins, and his compositions blood that presence. He sets up several moods, encompassing them in arrangements that draw the nectar without forsaking the tang.

Matta turns on the seduction from the time he sets the tempo on bass for "Baden," a tribute to the great Brazilian guitarist and composer Baden Powell. His doublets and triplets shape time and, as it evolves, pianist Klaus Mueller ups the ante. Initially reflective and probing, he goes on to add nimble layers of scintillating lyricism. The mood is advanced by the advent of Mauricio Zottarelli, whose tasteful drumming and sense of time help drive the momentum.

Melody is rife in the under-layered arco outing of "Pantanal." Matta's harmonic landscape is deep and vibrates with an inner majesty that divests itself of ornamentation. His subtle shifts of pulse and tempo enhance the impression of a musician whose vision is crafted by his insight.

While the originals make a singular impact in the way the music is envisaged and characterized, the band's reinvention of standards is no less elevating. "Trenzinho do Caipira" is lovely and captivating. The atmosphere is set up by saxophonist Harry Allen, who plays with controlled abandon and a sense for the dynamics of the tune. Flautist Anne Drummond is in full flight, her arching grace a sense for the ears, but the demarcations between the soloists condense into liquid pools in the ensemble passages. And the constant charm that is "Brazil (Aquarela Do Brasil)" is fanned by a seductive sway.

The flavor of Brazil lingers long after the last note has fallen, making Matta's voyage one for the ages.