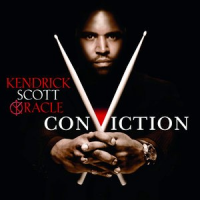 From the selfless prayer in the opening track to the sampled words of wisdom from martial arts great Bruce Lee in the track "Be Water," drummer Kendrick Scott's Conviction is an extension of self-motivated and thoughtful music that was witnessed in his 2007 debut The Source on his fledgling World Culture Music label. There is a sense of purpose here that is demonstrated throughout the appropriately titled release.

More than a sideman, Scott's fresh playing has heightened the music of singer Kurt Elling and trumpeter Terence Blanchard with finely tuned drumming that is bursting with kinetic tension and release. His leadership is fully realized in the evolution of his band Oracle, a collective of shining peers that articulate the drummer/composer's thought-provoking and welcoming music; eleven compositions that are connected in a single stream.

Oracle's been updated with the return of guitarist Mike Moreno whose fluid runs move like water, and the addition of multi-reed soulfulness of John Ellis, rising pianist Taylor Eigsti and the sure underpinning of bassist Joe Sanders. With maturity and planning, this project is audibly gorgeous with plenty of melodicism and meditative themes. The seamless linking of the tracks play out like cinematography, each piece varying in mood and tempo but intricately connected.

And there are also pleasant surprises as suitably demonstrated by the talented singer/guitarist Alan Hampton's guest vocals in the dreamy "Serenity," a cover of underground pop artist Sufjan Stevens' "Too Much" and the modernistic swing in "Cycling Through Reality" where Scott releases an iridescent solo that is later answered through convincing declarations from the musicians. While there are plenty of fireworks exploding throughout the set, the overall vibe is one of persuasive introspection.

Pendulum; Too Much; I Have A Dream; We Shall By Any Means; Liberty Or Death; Cycling Through Reality; Conviction; Apollo; Serenity; Be Water; Memory Of Enchantment.