Soweto Kinch: Conversations with the Unseen 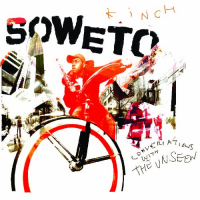 Shortly after he released the RH Factor last year, trumpeter Roy Hargrove said, "They had me figured for a jazz guy. But I have roots in hip-hop and R&B. This album is just the opening of a door." On Dec. 7th at the Jazz Gallery, British alto player/rapper Soweto Kinch opened that door a little wider.

On its debut album, Conversations with the Unseen , Kinch's band begins with an organic groove, while Kinch and a guest vocalist rap, "we open it up, we open it up." The music veers seamlessly between a hard, intensely urban pace, a soulful vibe with lots of room to stretch out, and a penchant for original melodicism. Kinch, Femi Temowo (guitar), Michael Olatuja (bass), Troy Miller (drums) and Abram Wilson (trumpet) base their concepts in swing, but step way outside the 4/4 box on jaunts like "Spokes and Pedals," on which the lines get notey but never contrived or arrogant. The 26-year-old saxophonist simply has a lot to say. When he puts down his instrument and picks up the mic, his spoken word is meaty and complex. Kinch raps likes he plays; he changes time agilely, he uses internal and end rhyme, and he relies on the natural accents of syllables to further the complexity of the tune and tell a story.

Clearly influenced by the history of both rap and jazz, Kinch flirts with Ellington's swing on "Doxology" and Rollins' affection for Latin rhythms on "Mungo's Adventure." As for the rap, Kinch's individual style is occasionally obfuscated by homage. For example, "Intro" is all too reminiscent of the Roots' opening track on "Do You Want More."

In the early '90s, there was just enough room for hip-hoppers to weave improvised music into their sounds and by the end of the decade, artists like Mos Def had followed suit. Since 2000, Hargrove, Nicholas Payton and others have explored the potential of spoken word in a jazz context. Kinch's first album is the next logical step. Rather than pigeonholing itself as groove or rap or R&B-flavored jazz, the CD marries a countless array of contemporary elements without losing sight of the tradition of improvised music.