By EYAL HAREUVENI
January 28, 2012
Sign in to view read count 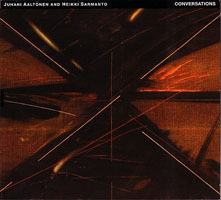 Saxophonist Juhani Aaltonen and pianist Heikki Sarmanto are two icons of the Finnish jazz scene. Collaborating constantly for almost fifty years in myriad outfits and formats, despite many moves in their busy musical careers, they have never recorded as a duo. These two "incurable romantics," as Aaltonen defines it, use this opportunity to record an album featuring their unique musical communication as one musical entity.

All 16 improvisations—based on Sarmanto's melodies, spontaneous creations in the studio and two standards—are launching pads for the pair's rich and sophisticated melodic language—romantic, at times, but never sentimental. Reflecting a shared musical history, collective experiences and love for improvisation, this remarkable duet was recorded without any preconceived notion of how the music was going to turn out; it simply flowed effortlessly from some mystical source outside their shared musical consciousness, almost creating itself, as Sarmanto testifies.

Most of Sarmanto's compositions—often drawing inspiration from his love of Finnish and American poetry—date back to the seventies, a creative period for both musicians, but his writing only suggests the basic framework for their highly sensitive and patient interplay. The free-flowing interplay sounds fresh, joyful and modest—focused totally on the compositions' melodic content, as if the two only recently began to explore and share their love for a good melody. Some of Sarmanto's material was first composed for ensembles with vocalists, while others reflect his experimentation with abstract form, free of fixed tonality. Three pieces appear here for the first time.

"The Sea In The Moonlight" is one of Sarmanto's most impressive interpretations of poetic texts, inspired by a poem by Eino Leino and featuring Aaltonen's passionate and poetic work, reflecting the poem's dark, somber tone. On "Evening Haze," based on poem by one of Finland's most beloved poets, Aaro Hellaakoksi, Aaltonen and Sarmanto use only a fragment of the song to articulate its sad and melody. Only the painful and intense "War Trane" is different, a composition that reflects the huge impression of John Coltrane 1961 Helsinki concert on the two of them, their love for the Coltrane's music and their experiences as "war children" that were sent to safety in Sweden towards the end of World War II.

The two standards—the romantic "You And The Night And The Music" and melancholic "Alone Together"—also stress the relaxed, intimate communication and almost infinite melodic possibilities that both players find, even in such well-known themes. The five spontaneous improvisations are more spiky and intense but still rely on a clear melodic structure despite the open-ended and often busier attitude. All sound as part of a long conversation between two veteran comrades that need few words and only the occasional gesture to convey a whole world of inspiring stories and deep emotions.

Little need be asked from such great masters, other than more recordings of such impressive and rare musical affinity.

CD1: When I Was With You...; So Much Happened; What We Cannot Imagine; ...It Happened Today; Le Petit Soldat; Just Like a Dream; You and the Night and the Music; Evening Prayer. CD2: From Nothing; No Work Bound Me; Free Souls; The Sea in the Moonlight; War Trane; Peace Talk; Alone Together; Evening Haze.