By DAN BILAWSKY
November 25, 2010
Sign in to view read count 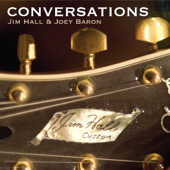 The art of the duo is nothing new to guitar legend Jim Hall. His one-on-one encounters with bassist Ron Carter have been wowing jazz fans for decades. More recent mano a mano musical encounters with equally sublime artists, like pianist Geoffrey Keezer, and guitarist Bill Frisell, have produced works that challenge but, ultimately, remain largely listenable. Conversations—Hall's studio encounter with drummer Joey Baron—ultimately, falls into the same general category. The fifteen tracks here are an odd, yet endearing, mishmash of musical material.

The album opens with a sensational, and woefully short, take on "Bag's Groove." A deep, irrepressible rhythmic core is present and suggest what Jim Hall might sound like in a jam band setting. While both men could have churned out a whole album of material in this vein, the discussions get deeper and the groove is cast aside for a while. "Reinhardt" doesn't have any genuine gypsy leanings and the music is free, but rhythmically centered. Splashes of sound—as opposed to paint—are everywhere during "Pollock" and both men remain confident with their clatter. Hall alternates between brittle, auto-harp allusions and Frisell-ian lines at the outset of the title track. Baron's melodic cymbal sounds and toms end up coalescing into a groove-making entity that evolves through the remainder of the song.

"Ballad Painting" is all about Hall's explorations over a wide open vista, but the real ballad painting comes later in the album, with Baron's "Pocketful Of Change." "What If" begins as a series of freely executed solo segments. Baron's inner Elvin Jones comes out during his first statement, but he tempers his tone after Hall has his way. Eventually, both men meet and a noisy ruckus ensues. Hall's alternations between gorgeously strummed chords and single notes is the focus of "In Repose," and Baron provides some dark cymbal hues beneath the guitarist's patient strumming on "Monet."

A steady, chugging drum presence and some countrified guitar come to the fore during the forty-seven second life span of "Uncle Ed," and this track signals the return of the groove. The exotica of "Safari" is bolstered by Baron's terrific tom work and his sixteenth note-based hi-hat work on "Travelogue" is central to that song's success. A short trek through "St. Thomas" features more of Baron's slapping, tapping and thwacking on toms, and a different side of this duo comes to light on the bonus track ("Time") that ends the album. "Time" begins in a sparse, tense zone, and it would be easy to imagine this music as an alternate soundtrack to a pre-gunfight scene in a Sergio Leone film. Ultimately, time takes over and a more ordered sense of rhythm and melody comes into play. Both Baron and Hall are restless explorers and musically sensitive painters. Conversations easily attests to these facts.