By EYAL HAREUVENI
December 20, 2014
Sign in to view read count 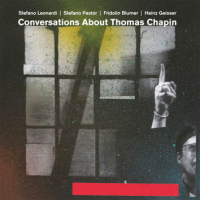 American saxophonist and flautist Thomas Chapin left the planet too soon, on February 13th, 1998 after a year-long battle with leukemia, when he was only forty years old. His inspiring spirit lives on, as the heartfelt tribute by Italian flautist Stefano Leonardi proves. Leonardi doesn't attempt to recreate the sorely missed Chapin's sound, or the unique, powerful interplay of his bands, mainly the trio with double bassist Marivo Pavone and drummer Michael Sarin, though it is obvious that Leonardi is well-versed in Chapin's discography, and acknowledges his legacy. Music, for Chapin as well as Leonardi, is about immediate, open communication, from the leader to his band, to the audience, to the Higher Principle and back, spiritual expression of deep feelings and compassionate humanism, part of a great communal language about brotherhood and love of all men, even when your art touches the experimental terrains of jazz.

Six of the improvisations are indeed conversations-meditations with and about Chapin. The quartet, Leonardi, violinist Stefano Pastor, bassist Fridolin Blumer and percussionist Heinz Geisser reference themes, fragments and instantaneous gestures of Chapin compositions and playing style. All are clearly influenced by Chapin's charismatic musical personality. They don't try to rearrange, cover or imitate him but acknowledge what Chapin meant to transmit through his emotional artistry.

The opening, title piece and the last one, "The Melody Remains," reflect little of Chapin's compositions. But the rest of the compositions, except a cover of "Amina" from Anima, (Knitting Factory, 1992), and Live! On Tour (Akasha, 1999) acknowledge various elements in Chapin art. The need to surrender to the creative force of the music, bigger than any ego, the collective manner of music making, creativity as a spiritual manifestation with music and melody as expressions of profound love. None of the quartet members are gifted with the magnetic force of Chapin's presence, but that does not matter. All perform with joy, passion, imagination and an elegance that would have thrilled Chapin, as his widow assures in the liner notes. The emotional "Anima," with its playful interplay and the slow exploration of its melodic core, is masterful in its humble beauty and impressive testimony on music as a healing force.

Conversations about Thomas Chapin; Let the Creative Force Take Over; The Way Everything Works; Transcendental Journey (a Clean Slate Every Night); Music Exists Because We Love It; Anima; The Melody Remains.