By ANDREY HENKIN
October 5, 2004
Sign in to view read count 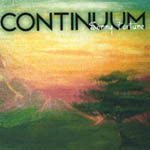 For those that only know Sonny Fortune through his work with the Three Altos or his duo with Rashied Ali, his new self-released album Continuum will present a very different musician. The aforementioned groups feature Fortune solely on alto and as a firebreather playing on standards. Not that there is anything wrong with that (a set with Ali last month featured a 40-minute "The Song is You" that rattled the Sweet Rhythm silverware) but Fortune has other facets, all on display on this album.

First is Fortune the multi-instrumentalist. Alto appears for less than half the album, liberally mixed with tenor, soprano and even alto flute. Second is Fortune the composer; the album is nine tunes, seven of which are originals. And third is Fortune the bandleader. While he may be the spokesman for the Altos or the Duo, there he is a reluctant frontman. Continuum allows him to relish that role, heightened by the fact that this is his first attempt at putting out his own music on his own terms, something he was loathe to do on his numerous albums since the '70s.

Fortune has assembled a solid band behind him: George Cables (piano), Wayne Dockery (bass), Steve Johns (drums), and Steve Berrios (occasional percussion). The music he provides his sidemen is well-composed and surprisingly gentle given his recent experiences. Much of it is homages to influences like "Trane and Things" and "Four Five Trane" with their more-than-passing reference to "My Favorite Things" and John Coltrane Plays The Blues respectively or his tenor feature "Wayne-ish." The rest of the material, including great covers of "Delilah" and "Nature Boy," presents a swingin' Fortune with a clean tone and focused approach. Continuum is a good accessible introduction to Fortune's work away from the live lengthy workouts that take time to appreciate.