By JOHN SHARPE
November 7, 2012
Sign in to view read count 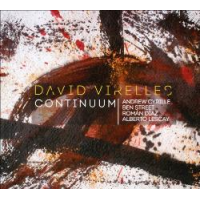 Pianist David Virelles adopts an unusual strategy for his second album and first on Pi Recordings. Eschewing the piano pyrotechnics which illuminated his debut, Motion (Justin Time, 2008), he opts for an exploration of Cuban folklore and its manifestation through poetry, storytelling and art. Inspired by Afro-Cuban religious practice, Virelles has created a set of episodic tone poems and throbbing rhythms. Consequently there are only glimpses of the talent which has seen him named as one of four young pianists on the rise by the New York Times and recording dates with saxophonists Jane Bunnett and Chris Potter, and trumpeter Tomasz Stanko.

To realize his conception the 29 year-old Cuban calls on bassist Ben Street-a colleague from his time with saxophonist Mark Turner-along with veteran drummer Andrew Cyrille, himself of Haitian descent. Completing the band is poet and percussionist Roman Diaz, whose dramatic gravel- voiced recitations in Spanish and Cuban ritual languages add an air of exotic mystery to four out of the 12 cuts in the 41-minute program.

Virelles supplements his pianisms with harmonium and organ washes to add ambient color. At times he brings to mind another pianist with Caribbean roots, Andrew Hill, in his shifting sense of time and unsettling harmonic intervals, most notably on the unaccompanied "Short Story for Piano." Such are the constraints that he places upon himself that the closest he comes to stretching out are on the breathless tumbling "The Executioner" and multifaceted "Our Birthright," which forms the fulcrum around which the program hinges. Supplementing the core group on the latter track, Virelles calls on a horn chorus comprising saxophonists Mark Turner, Roman Filiu and trumpeter Jonathan Finlayson. Together they contribute a seething orchestral mass, but without opportunity for individual excursion. Other worthwhile tracks include the gammy "Royalty," where the leader's lopsided lope tops a staggered tattoo, and the gentle trio ballad "Threefold," where the wispy cymbal embellishments are spiked by insistent mild dissonance.

Overall this may not be the best place for newcomers to appreciate Virelles' undoubted ability. While the ambition is admirable the concept translates fitfully to disc, leaving the impression that this ultimately inscrutable outing might be better appreciated as a multimedia event.

El Brujo and the Pyramid; The Executioner; Spectral; Unseen Mother; Royalty; Our Birthright; Short Story for Piano; A Celebration, Circa 1836; Threefold; Mañongo Pabio; To Know.