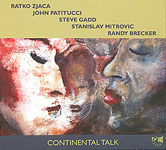 When a group's credentials include bassist John Patitucci, drummer Steve Gadd and trumpeter Randy Brecker, it's not an unreasonable expectation to hear some quality jazz. What may be more surprising is that leader, guitarist and composer, Ratko Zjaca and his longtime collaborator, saxophonist, Stanislav Mitrovic, steal the show on Continental Talk. This revelation is almost entirely due to the relative obscurity of these Croatian musicians in the U.S. As a teenager, Zjaca was inspired by performances from both the John Coltrane and Miles Davis groups in his native country. There are a number of middle-eastern styles that have also informed Zjaca's previous work. Though he has worked with a number of principal talents in jazz, it is his 2004 duo release with Mitrovic, Shades of Spirit (Sam Sam Music), which best demonstrates both musicians' sweeping creativity.

"Breakfast in Tokyo" opens the set as a mid-tempo, post bop number that, almost imperceptibly, leads into a slower paced solo from Zjaca before Mitrovic picks up speed with own intriguing solo. Patitucci also establishes his own important role right from this opening track. It's a fine and promising start to a program of nine original Zjaca compositions and three from Mitrovic. "Portrait in Retrograde" with a breezy Jobim feel to it, is a bit of calm before the storm. "Kurasawa" sees Mitrovic breaking out with an extended improvisational solo that is truly impressive, while Zjaca follows with a solo that has a touch of Pat Metheny, one of his earlier teachers. "At the Crossroads," at slightly under three minutes, is a charming duet between Zjaca and Mitrovic, and one of the real highlights of this recording.

The tempo continues at a leisurely pace on "Home Again"—a folksy piece featuring Zjaca on acoustic guitar and Mitrovic on tenor. "Correspondance" is where the quartet switches to quintet with Brecker's first appearance. Not surprisingly, things take a funky turn, with Brecker sounding as good as ever, blowing a rapid-fire setup for some of Zjaca's most energetic playing of the set. However, it is Mitrovic's tenor that, once again, becomes the attention-grabber with a short but dynamic solo. Mitrovic picks up the soprano and dramatically slows down the tempo on the appropriately titled "Feather," a piece that, once again, highlights the great interplay between the saxophonist and Zjaca, as they weave a dreamscape melody with just enough free play to turn it into a duet that could easily have continued much longer.

Whether Continental Talk is featuring a duo, quartet or quintet, it manages to seamlessly mix some beautifully lyrical pieces such as "Anibas" with fusion-oriented works like "E Doubt" and straight-ahead numbers like "The New Life." What is most remarkable about Continental Talk, however, is the broad spectrum of skills in the hands of Zjaca and Mitrovic. Their ability to create and perform in what amounts to a cross-functional mélange of jazz styles is impressive, and the results are highly enjoyable.