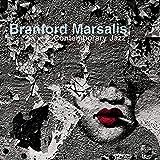 Although the penultimate release from Branford Marsalis was entitled Requiem, this outing for sure embodies a fitting tribute to Kenny Kirkland. The pianist died mid-recording of Branford’s last disc, shocking the young saxophonist and causing him to find a new rhythm section leader. Well actually Tain Watts is the center of any rhythm scene wherever he plays. Calderazzo fills the Kirkland role in a sort of meddling way. While and accomplished pianist on his own, Calderazzo doesn’t fit nicely into Branford’s jazz vision. His piano seems to agitate and disturb the tenor. Marsalis is a talented trio saxophonist, in that I mean he can carry the melody and his improvisation without the need of a piano, as evidenced on his recordings Trio Jeepy (1988), Bloomington (1991), and The Dark Keys (1996). Most of the tracks here work best when either Marsalis or Calderazzo listen to the other play in trio format.

The highlight of the record is Marsalis’ remake of Irving Berlin’s “Cheek To Cheek.” Playing havoc with time signatures, Branford and Watts reshuffle the familiar to create the infinite in terms of permutations of the song. His reworking a song, be it an original or his own “Elysium” (originally on Requim ), is Branford’s strongest suit. After Marsalis opens “Cheek,” Calderazzo follows in the deconstruct mode, chasing the melody up and down the keyboards. While the songs are not just soloing devices, the solos here are significant. Watt’s opens “Tain Mutiny” with his patented thunder attack before Marsalis spits a horn line and the wrestling match continues. And, like the WWF, all the mayhem is choreographed. You just got to love Tain’s pulse over Branford’s best Coltrane blowing. The set closes with the Gospel tinged “Countronious Rex,” named for the drummer’s country roots. The Pittsburgh-born Watts (the Steeler’s country?, well maybe Terry Bradshaw) wrote the hand-clapping soul station blues it seems to act as an old fashion revival. Reminds me of Cannonball Adderley and his feel for a great song.