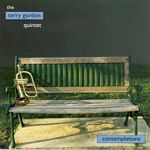 The Terry Gordon Quintet has made music as a group for more than a decade, and it shows: their ensemble is tight and intuitive, their soloing bright and confident, and their improvisation brash and innovative. Contemplations (2002) is their second CD; their first, Wakeup Call, was released in 1996.

Many of these nine originals (seven by Gordon and two by Walentowicz) are designed to stretch the envelope: the more conventional are bop-oriented mainstream interspersed with Latin jazz and funk; the more adventuresome are unabashedly and unapologetically rock-strewn and avant-garde. “Contemplations” is an aptly titled minor key Latin exploration, pensive and melancholic, while “Fish Out of Water” is a quirky, infectious blues, with strong trumpet and Scofield-like guitar solos. The composer Walentowicz achieves an oboe-like sound from his soprano; at times, the group has almost a chamber quality. “Persistence” is funk with a vengeance; Tibbits’ guitar solo is rock candy, Gordon’s trumpet is crisp but full-bodied, and Rafalak’s bass solo crackles with energy and electricity.

The noteworthy flute playing of Walentowicz, plus solos all around, constitute “Watching the Storm Go By”; the changes are Latin spun sugar, sweet and simple but without a lot of nutritive value. “Structural One-ness,” on the other hand, is tart and fusiony, more than 13 minutes on a miniscule theme, nagging, sort of like a musical toothache. Walentowicz’s “Anxious Moments,” titularly more frenetic, is actually more ordered, an interesting hard-bop song form built on what sound like fragments of whole-tone scale.

Another ballad, “1-4-3,” features Gordon on fluegelhorn, as did “Contemplations,” and provides an emotionally rich change of pace. But not for long. “Quest for Sanity,” an apparently unsuccessful search*, is nearly 11 ½ minutes of ordered chaos, unstructured and avant-garde, although the piece maintains a driving, rhythmic center throughout much of it. The eclectic and uneven ride ends, unruffled by a uniquely inspired drum solo, on a decidedly more contemplative note with the dreamy, slow ballad, “Flowers That Beckon.”

* Postscript: I gave Contemplations one more spin to detect any hint of sanity appearing near the end, but alas! There was none to be had...