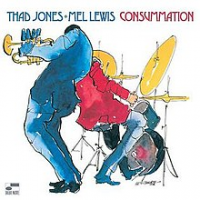 When it came to progressive big bands during the ‘60s, few ensembles could boast the kind of staying power and muscle of the Thad Jones-Mel Lewis Jazz Orchestra. With some of the biggest names in the business as part of the ensemble’s regular roster and the uniformly exceptional output of writer Thad Jones, this band was successful at a time when economics were making it hard for even established organizations to stay afloat. Unfortunately, the great legacy of the Thad and Mel band was documented on the Solid State label and aside from a Mosaic boxed set compiling that material which is long out-of-print, none of the group’s historic output for the label is available on disc (let’s modify that slightly in that you can get CD reissues of the Joe Williams and Ruth Brown sets that are backed by the band, but these are of a different set of cloth).

Helping to rectify things ever so slightly is the recent reissue of Consummation, the band’s one and only release on the Blue Note label. But this was really not a Blue Note set in the truest fashion. Solid State’s own Sonny Lester in fact, produced it. Furthermore, engineer Don Hahn would be at the dials, foreshadowing his work on later Jones-Lewis projects for A&M Horizon. Eight distinctive Jones originals make up the program here, although only “A Child Is Born” really caught on. Too bad because cuts like “Us” and “Ahunk Ahunk” slide between funk and rock grooves in way that’s always intuitive and never cloying. And for up tempo swinging of the high octane variety there’s an almost eleven minute version of “Fingers.”

Aside from a solid rhythm section which features Roland Hanna and Richard Davis, there are a number of star soloists including Pepper Adams, Joe Farrell, Marvin Stamm, Jimmy Knepper, Eddie Daniels, and Howard Johnson. So until those Solid States come out again in some form, pick up Consummation and enjoy the vibes.

Dedication; It Only Happens Every Time; Tiptoe; A Child Is Born; Us; Ahunk Ahunk; Fingers; Consummation (46:32).