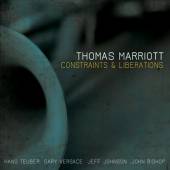 Listening to Thomas Marriott's Constraints & Liberations, two things are abundantly clear: Marriott spent some serious time studying Miles Davis' second great quintet; and, his own voice on trumpet is developed well enough to make it sound like a strong, easily recognizable influence, but not plagiarism. Naturally, favorable comparison to the one of the greatest standing outfits in the history of jazz is intended as a compliment.

The record has a moderate, ocean wave-like pace, but with a persistent intensity that never veers into sluggishness. Jeff Johnson's bass work is slyly propulsive, ensuring that everything moves forward, with drummer John Bishop filling and beating around him. "Clues" uses the bass to set a heartbeat under Marriott's bronze tone while "Waking Dreams" shows off the rhythm section to great effect as lead instruments as well, with Johnson improvising over subtle brushwork and tapped cymbals.

The fine, under-recorded reed man, Hans Teuber—playing tenor saxophone on this date—adds a rich, second horn to the affair. On "Early Riser," he delivers the most optimistic statement on the album, with an extended solo that blends a lighter—albeit intensely played—mood over Gary Versace's piano. Versace follows with a turn himself, working out a set of dissonant block chords to reassert the track's blue modernism.

The opening "Diagram," and closing "Threadstone" are immediately reminiscent of Wayne Shorter's title track to Davis' Nefertiti (Columbia, 1968). Where "Nefertiti" is an endlessly droning variation on a five-note theme, "Diagram" states the theme then quickly opens up for an improvisational cycle. Marriott's horn, played open here, is dark-hued and rich, with some wavering intonations that make single notes sound as if they're melting. On the other hand, "Threadstone" retains the repetition of Shorter's composition, invoking an atmospheric landscape, sans any dramatic individual statements, that builds tension until its abrupt finale.

Marriott delivers his finest trumpet playing on the aforementioned "Clues." Bass vamp notwithstanding, the arrangement is a dark, sparsely arranged study in melancholia. The trumpet sounds like it's been dipped in luxuriant bronze, using the deepest tones of the horn's range. It's a gorgeous piece of playing. Versace follows up with his own probing solo, even as Johnson holds the whole thing together at the bottom.

The shadow of Miles Davis is cast long over Constraints & Liberations, but then Davis' shadow is long over a lot of great music. Marriott's effort here is a terrific album in its own right, even if it wears its primary influence on its sleeve.