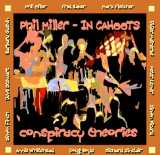 Maybe it's not fair to refer to guitarist Phil Miller's times as a member of British bands Delivery, Matching Mole and Hatfield & The North as that was all some decades ago. But the fact of the matter is that the often very straightforward nature of the music on this one loses out in comparison with those names. Whereas once the music was alive with quirks and all, the diffidence that could be mustered when playing in a time signature of say, 7/4, very little of that kind of thing seems to ruffle the surface of the polite fusion on offer here.

This is not however to suggest that the music doesn't have its moments. The line of Miller's "Press Find Enter" has a quality that embraces both light and shade, and trombonist Annie Whitehead's solo seems to tease that quality out with equal measures of both joy and trenchant wit.

The broken time of "5s & 7s" has a similar stamp to it and the enhancements of Barbara Gaskin's minimal wordless vocal contribution and alto sax played presumably by Didier Malherbe lift it out of the realm of the polite and make it memorable.

"Orinaca" also has an individual air about it, not least as a result of Malherbe's work on ocarina. Keyboard player Pete Lemer's deft touch colors the line nicely and the result would fit nicely particularly within the Hatfields context.

Miller has always been a guitarist of distinction, and it's thus sad to relate that there are times here when it's like he's absent from his own disc. On the Weather Report-like "Flashpoint," bassist Fred Baker gets his turn in solo and underscores that comparison with a display of Pastorius-like dexterity. For all of Baker's formidable technique the listener might just be left wondering what Miller would have made of the opportunity had he taken it himself.

On the lengthy "End Of The Line," Miller does come out of the ensemble for one and it's like the sun coming out on an otherwise cloudy day. All the hallmarks of his work are still in place—his idiosyncratic phrasing, his sense of economy, before the demands of a fusion idiom in which technical precision and 'correct' virtuosity are of overriding importance seem to regain the upper hand.

About Phil Miller - In Cahoots